An historic apartment block situated in Killarney and built just after the Second World War is the winner of the coveted first prize in the 2012 Pam Golding Properties’ Outstanding Verge Competition. According to Pam Golding Properties (PGP) Hyde Park joint area manager, Jonathan Davies, the gardens of Rapallo were chosen as the winning entry in the popular competition because of its colourful splendour and unusual composition comprising roses, cacti and carefully crafted rock features. 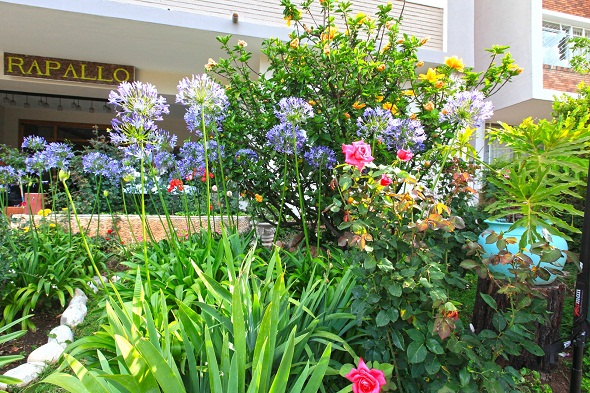 Rapallo, an historic apartment block situated in Killarney, Johannesburg, is the winner of the coveted first prize in the 2012 Pam Golding Properties’ Outstanding Verge Competition.

“This gem of a garden makes you feel as if you are in the heart of nature rather than in the middle of a highly built up suburb such a Killarney,” said Davies. “This is the first time that an apartment block has won the competition and they certainly deserved first prize. PGP warmly congratulates the Rapallo team under the aegis of caretaker Celeste Mulholland for their magnificent effort.”

According to Davies the PGP Outstanding Verge Competition is held every year in Johannesburg’s northern suburbs in order to encourage people to beautify their verges. He says that while verges create an important first impression on visitors and can even impact property prices within a neighbourhood, they are often not considered by homeowners. The competition seeks to change this whilst encouraging homeowners to take pride in their verges.

“Attractive exteriors not only improve individual homes, they assist in making communities attractive and engender a sense of pride in a neighbourhood. The competition aims to get the people of the northern suburbs to think about their environments and how these impact on property values. We also want to encourage residents to get creative in the beautification of their neighbourhoods.”

Speaking on behalf of Rapallo, Celeste Mulholland said that the residents were immensely proud of their verge and the fact that they were the first ever apartment block to win the 2012 PGP Outstanding Verge Competition. The garden was developed by the 27-year old Sphiwe Matshen and the 30-year-old Jacob Lethole, a team who has worked at the complex for three and four-and-a-half years respectively. Sphiwe Matshen and Jacob Lethole lovingly created the verge with the aid of magazine pictures of colourful gardens sourced by Celeste as their inspiration. One of the most prominent features of the Rapallo garden is its roses, which are a particular passion of Matshen’s.

According to Matshen roses require a great deal of patience, time and love. His personal favourite is the Double Delight, a beautiful hybrid tea rose. What makes this rose so special is the fact that the blooms are at first creamy white with just a slight red tinge on the outer petals. As the roses mature so too does the intensity of the red colouring. The most memorable feature of the Double Delight is the startling contrast between the layers of the bright red outer petals and the creamy white heart of the rose.

The Rapallo apartment building, bordering on the Wilds, was built in the 1950s by Italian prisoners of war and features two original Baldinelli artworks in the entrance hall. One of the pieces comprises a colourful mosaic feature, which forms a backdrop to an unusual art deco stainless steel water feature while the other is a striking Picasso-styled oil painting.

The winning prize is R20 000 and also includes a vegetable garden start-up kit for a charity of the winner’s choice. Celeste Mulholland thought the competition was an outstanding initiative as it really encourages homeowners to make an effort to improve their verges.

PGP Hyde Park joint area manager Rupert Finnemore says that a number of different criteria are considered when judging the verges entered into the competition. The overall attractiveness of each verge is the starting point with the innovative use of plants and features such as rock formations, stone carvings, water features and other elements being considered as well. Some of the verges are indigenous while others have special themes. He notes that a special effort is made to judge each verge in its own right.

“This is the second year of the competition and we at PGP are delighted to see it growing from strength to strength. This year the competition was particularly well received and there were even more entries from the property owners in the northern suburbs than in previous years. We encourage our communities and house-proud residents to think about how they can contribute in the beautification of their neighbourhoods and to get involved in the competition.”