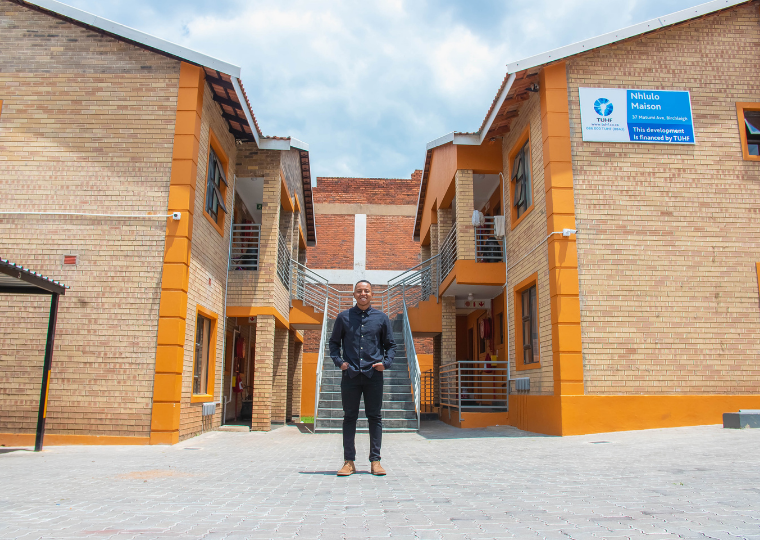 The Nhlulo Maison project. TUHF creating impact through scale in the eastern suburbs of Gauteng.

Standard Bank has increased the capacity of TUHF’s loan origination facility from an initial R700 million to R1 billion. As a commercial property financier specialising in inner-city areas, the increase in the facility will enable TUHF to further expand its lending activities in inner- and in-city areas across South Africa.

The loan facility is designed to be repaid by securitising the underlying loans after which the loan can be renewed. Since the facility’s launch in February 2020, it has been successfully renewed twice – first in March 2021 through the securitisation and sale of the loan assets to Urban Ubomi 1, TUHF’s second securitisation listed under the JSE’s sustainability segment in March 2021, and then in February 2022, making the Standard Bank warehouse facility available for a further period.

“TUHF’s ability to raise over R1 billion through Urban Ubomi 1 using the Standard Bank warehouse demonstrates the strength and resilience of the organisation’s brand, making it an attractive platform for investors to select as their chosen vehicle to invest their funds and demonstrate social impact under the TUHF Social Bond Framework,” says Ilona Roodt, CFO at TUHF.

The larger warehouse facility from Standard Bank further empowers entrepreneurs who borrow finance from TUHF who might not have access to traditional funding mechanisms.

“The timing of the increase by Standard Bank coincides with increased deal activity in the rental property market that TUHF services. This is further evidenced by the recent increase in our deal flow. Having the support of Standard Bank bodes well for TUHF’s ability to maintain healthy liquidity levels, respond to market demand, and grow the business in a challenging economy,” says Paul Jackson, CEO of TUHF.

The partnership between TUHF and Standard Bank continues to enable the revitalisation of South Africa’s in- and inner-city areas, and township areas. Previously and for 19 years, TUHF had only financed according to a list of specified areas. However, as the surrounding areas of inner cities continue to present growing demand for affordable housing and thereby investment opportunities, TUHF is actively responding to the market by expanding its list of preapproved areas and backing local and emerging property entrepreneurs in new target areas.

“TUHF has demonstrated their skill and experience in the market and have provided a compelling environment to grow inner-city development and renewal. We are looking forward to seeing more of the positive social and economic impacts our collaboration with TUHF is making”, says Nicholas Gunning, Head Securitisation Debt Capital Markets at Standard Bank.