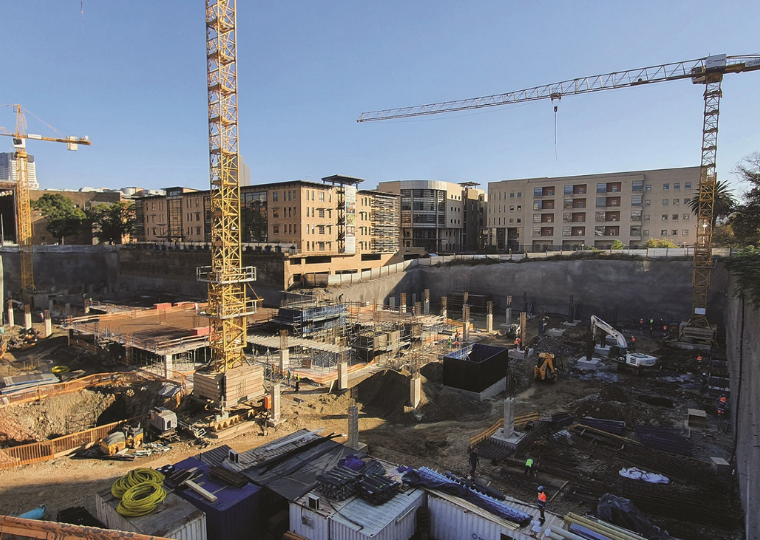 Concor has been appointed as the principal contractor on the Public Investment Corporation’s (PIC) Trevenna basement project in Sunnyside, Pretoria, which is a precursor for A-grade office buildings in the Trevenna office campus.

According to Martin Muller, Senior Contracts Manager at Concor, the project is part of a multi-phase development at the Trevenna Campus which will commence as soon as the major earthworks are completed. The company will carry out the first and second phases of the project which comprise of a five level 68 000m2 super basement with all services, lobbies, and finishes.

The large basement extends some 20 metres below ground level and will be constructed with post-tensioned concrete slabs. The scope of the work also includes extensive underground services such as sewer and stormwater infrastructure, electrical reticulation, lifts to the ground floor and access control.

“It is likely that the fast-track project will deal with challenging rock conditions and water ingress from surface and groundwater. We are, however, ready to deal with any of these challenges,” says Muller.

Phase 1 of this eleven-month project began in March 2022 with Phase 2 planned to commence in June 2022. Phase 3, which is yet to be awarded, will comprise of four A-grade office buildings some five storeys high, making up almost 43 000m2 to be constructed above the super basement.

In line with local procurement principles, the project will rely heavily on local subcontractors, suppliers, and labour, with a considerable workforce of 500 to 600 people expected to be active on site. Among the key subcontractors will be specialists in excavation, formwork, concrete, post-tensioning, and reinforcing.

Space is at a premium, as the footprint of the basement extends across almost the entire site and Muller notes that dealing with the challenges of congested urban environments is one of Concor’s many strengths.

Concor will deploy five tower cranes on the site to facilitate the fast pace of construction required, ensuring the safe and expedited movement of steelwork, formwork, and other construction materials. Readymix concrete will be pumped in-situ for the post-tensioned slabs.

“This is the first contract that we will undertake for the PIC, and we look forward to delivering excellence and demonstrating our extensive capabilities,” concludes Muller.