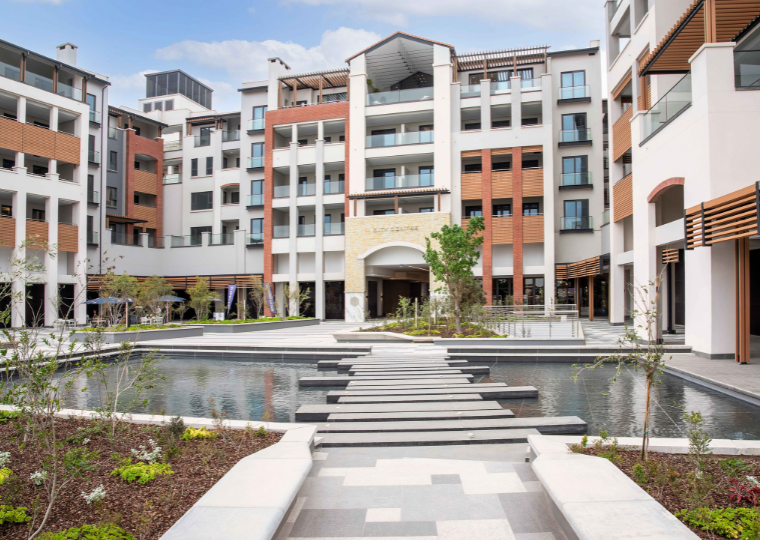 Architecturally designed by Steyn City Architecture Design (SCAD), a joint venture between Nsika Architects, dbm Architects, and Boogertman & Partners, their new development is unlike a traditional monolithic structure. In keeping with the ambience and atmosphere rooted within the Steyn City community, City Centre is a series of 38 4- and 5-storey ‘small villages’ built around piazzas that sprawl down a hillside, offering over 700 one-, two-, three-, and four-bedroomed simplex and duplex apartments measuring, on average, 70m2, making them substantially more sizeable than most apartments offering similar accommodation.

The ‘villages’ have been built around treed piazzas, which in keeping with Steyn City’s green ethos, have been planted with trees and shrubs all grown from seeds within its on-site nursery. On completion, the city’s piazzas will be lined with several bespoke retailers and restaurants.

As part of this exciting project, some of South Africa’s leading interior designers assisted in creating beautiful interiors for 6 of the apartments and 2 of the penthouses, which all speak to City Centre’s setting and context of luxury and convenience.

City Centre’s 2 000-car, super sub-basement is another significant feature; unlike most basements that are dark and intimidating, the super-basement is spread out over 9 hectares, boasting green lungs, ventilation, and lots of natural light thanks to its high roof with architectural cut-outs. The facility has been built around 18 lift cores, with ring road access, and all bearing a unique design element (such as mosaic, timber, granite, and marble) to ensure that residents find it easy to navigate their way through the basement to their apartments. The super sub-basement will also feature designated Uber drop-offs at all 18 cores, golf cart parking and electric car charging stations.

City Centre residents will be kept safe through a triple biometric access system with its own 24/7 security nerve hub located in the basement. Added to this, 600 multiple function cameras have been installed throughout the development with front desk offices on duty at key sites such as the lift lobbies, the piazzas, and basement.

While one would expect bustle and congestion within a development of this size, a truck tunnel has been constructed below City Centre’s basement with access for all delivery and service vehicles. It also bears refuse chutes originating from each floor, restaurant, and retailer so that the development itself remains clear and uncluttered.

Fondly referring to City Centre as the ‘Village’, Steyn City Properties CEO Giuseppe Plumari introduced the development to potential investors and homeowners in 2019 as part of the company’s ‘Vision 2020’ – a second phase which represented a further R5 billion investment in infrastructure spend and which included the launch of several new world-class facilities.

The developers had set out to create an offering markedly different from other apartment developments. “These apartments are not intended as a waypoint on the journey to homeownership; rather, they are permanent homes themselves, with an accent on luxury and space.” he explained.

“Every aspect of City Centre reaffirms our commitment to providing our residents and investors with the very best.” The development had benefits for the broader community too; more than 3 000 jobs were created during the construction of the City Centre Phase 1, a major infrastructure project which signalled the company’s dedication, and belief in, South Africa.

“We are particularly excited for this new chapter in the Steyn City story: all the convenience of apartment living, with its maintenance-free appeal, with the spaciousness of a 2 000 acre back garden. We would go so far as to say that the City Centre provides the blueprint for future cities.”

While City Centre has its own rooftop pools, residents have access to the other facilities on offer throughout the Steyn City development. These include the 18-hole Nicklaus design championship golf course, the equestrian centre (with its own clubhouse), the indoor aquatic centre, outdoor workout stations, a 50km mountain bike track, tennis courts, a 45km floodlit promenade for running and walking, and resort pools.

Most recently, the developers launched the Ultimate Helistop, offering chartered and scheduled flight services to residents and non-residents, and the 300m Lagoon powered by GAST Clearwater™; a massive lifestyle attraction complete with beach-style activities just a stroll away from City Centre.

Adds Plumari, “We offer investors both a solid and sound financial investment while also the lifestyle investment of a lifetime where families can live out their best lives in Johannesburg.”’

From the outset, the vision for Steyn City was to create a community centred around safety, convenience, and luxury. Capital Park, a 14-hectare commercial centre, is a key part of this offering. Presenting individually designed three- and four-storey buildings, with spaces as small as 150m2 available to lease, the facility easily lends itself to the post-Covid-19 hybrid model of remote working.

Steyn City School, an IEB-based campus comprising early years centre, preparatory and college schools, and catering from Grade 000 to Matric, is another plus in this regard.

Pricing for City Centre’s apartments range between R2.3 million to R35 million and residents can expect to pay an affordable estate levy of R1 600 per month, as well as a body corporate levy of R25 per square meter, ensuring the maintenance and upkeep of Steyn City’s world-class facilities and 2 000-acre parkland. Additional membership fees will apply to some facilities, including the golf club, the Ultimate Helistop, the aquatic centre with heated 25m pool, the lagoon and beach style facilities, stabling at the equestrian centre and the gym.

With the finalisation of Phase 1, 283 apartments have been completed. Of these, 185 apartments and 2 penthouses have recently been made available to potential buyers and the remaining apartments, are screen units. Construction on Phases 2 and 3 has commenced with completion scheduled for late 2024.