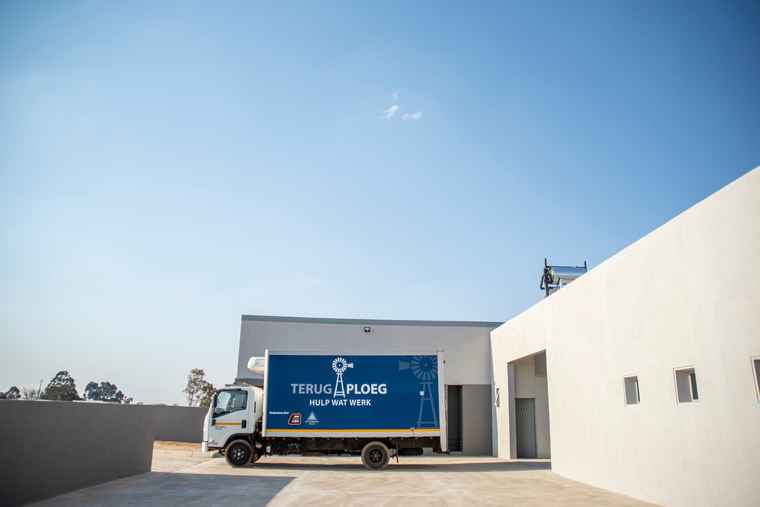 The newly completed packaging, processing and distribution facility for Terugploeg.

The packaging, processing, and distribution facility for Terugploeg is in the final stages of construction with the headquarters scheduled to be fully operational from November 2021.

The initiative originated during the lockdown period when Lood Bester and his friend Herman Marx from Vibro distributed food to needy communities on an informal basis. The project quickly gained momentum when many farmers became involved and delivered food.

The tons of food were distributed informally with the help of Vibro’s transport network, but it was realised that there was an enormous need, and a sustainable project, had to be launched. Atterbury Trust was approached and Terugploeg is currently being managed under its banner.

According to Zahn Hulme, executive trustee of Atterbury Trust, more than 125 tons of food had been distributed to old-age homes, schools, and orphanages in and around Pretoria since the project’s inception – an equivalent of approximately 503 000 meals.

“Transparency and accountability are important to people, and the Atterbury Trust has been depended on since 1998 as an organisation that effectively manages projects to give back. We work with organisations and make sure that they are properly managed and that the help reaches the right people.”

The Terugploeg Building was erected on 8 hectares of land in the east of Pretoria, on the N4, close to the Rayton off-ramp and made available by Faan and Dirk van der Walt, the founders of WeBuyCars.

Besides the food processing and cold storage facility, a vegetable and fruit garden has been planned as well as a clothes bank. Co-founder of Terugploeg, Lood Bester, says that many employment initiatives are planned for the site – the meat will be processed, braai wood will be cut, packaged, and sold.

“All these functions require hands: to care for the gardens, to process the food, to sort, wash and iron the clothes we get in, to pack the loads of wood in braai packs … By means of this we want to create jobs for the people from the communities we serve,” he says excitedly.

It is also intended to set up a lecture hall in the building, in which courses and talks can be presented to inspire school children and adults with practical advice and training so that they can improve their own circumstances.

The official opening of the new Terugploeg facility is planned for January 2022.

How the public can help

All donations qualify for an 18A tax certificate issued by Atterbury Trust to make it tax-deductible.