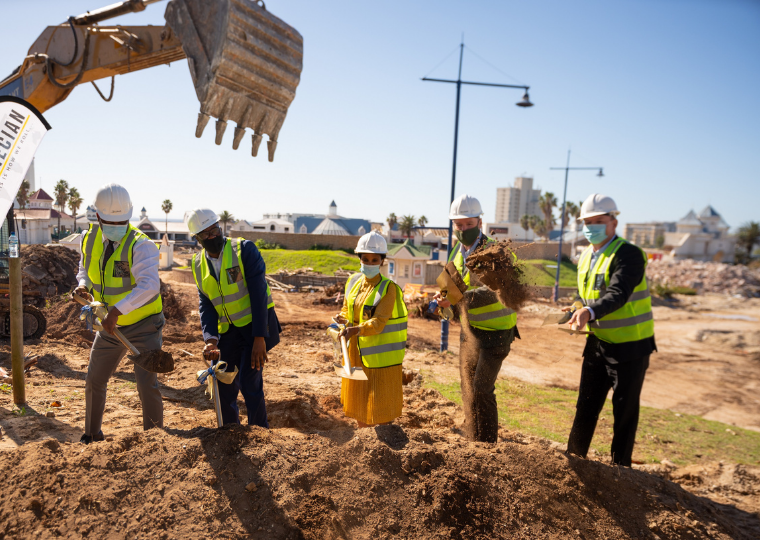 Construction has officially commenced on the Boardwalk Mall in Gqeberha in Port Elizabeth.

Two thirds of the mall’s development site in the Boardwalk Precinct was transferred to the Flanagan & Gerard Group in April 2021 with Emfuleni Resorts (a subsidiary of Sun International) holding the remaining third. At the same time, the plans for Boardwalk Mall received all the necessary approvals, clearing the way for construction.

Jointly investing R500 million into this major development, both Boardwalk Mall’s partners are committed to contracting employment and services from the local community wherever possible and Emfuleni Resorts have a long track record in the area with deep insights into the metropolitan city and its people.

Building on the success of the landmark Boardwalk Casino and Entertainment World, Boardwalk Mall is an extension and upgrade of the Boardwalk Precinct which will more than double its retail space to 23 000m2. It is the first phase of a 17-hectare redevelopment that is strategically, economically, and socially significant for the city and region.

The commencement of construction was celebrated at an official event attended by the Eastern Cape Provincial Government MEC of Finance, Economic Development, Environmental Affairs and Tourism Mlungisi Mvoko; Executive Mayor of Nelson Mandela Bay Nqaba Bhanga; Chairperson of Emfuleni Resorts Bongi Siwisa; and Managing Director of Flanagan & Gerard Paul Gerard, along with several of the precinct’s longstanding and new retailers as well as other stakeholders.

“The development augurs well for our agenda of growing the provincial economy by creating jobs,” comments MEC Finance, Economic Development, Environmental Affairs and Tourism, congratulating Flanagan, and Sun Boardwalk for providing a welcome boost for the Eastern Cape economy in general and the Nelson Mandela Bay economy. Mvoko praised the fact that R290 million of all goods and services would be procured locally, helping to revitalise and expand economic opportunities.

“By providing people with a variety of hospitality experiences, Boardwalk Mall will also have a direct impact on tourism numbers.”

Executive Mayor of Nelson Mandela Bay, Nqaba Bhanga described the development as “forward looking” and well-located on the city’s beautiful beachfront. “We must design a vision of the city that is owned by everybody and Boardwalk Mall talks to this, helping to position ourselves as a sporting and entertainment destination,” said Bhanga.

Bongi Siwisa, Chairperson of Emfuleni Resorts, said, “Twenty-three years ago, I stood on this site and proudly turned the first sod of soil, breaking ground for the then upcoming Boardwalk development, which was going to add a new vista to Nelson Mandela Bay.  And, today, I am proud to stand here again as part of the sod-turning ceremony for this R500 million extension and upgrade project, which will enable redevelopment of this precinct as well as provide much-needed employment and an economic revival in our Metro. Throughout this time, our vision has remained to provide a selection of offerings to both the communities of Nelson Mandela Bay and to those who visit our Metro, thus endorsing the need for tourism and an enhanced economy.”

Paul Gerard, MD of Flanagan & Gerard, said, “During this extraordinary time in history, it has become clear that people need convenient retail and enjoyable experiences in safe environments within their communities, close to where they live, work, commute and learn. One of the most inspiring aspects of Boardwalk Mall and the extended Boardwalk Precinct is that it will provide a genuinely exciting, engaging, and immersive experience and an enjoyable meeting place where locals can also fulfil their daily retail needs.”

The Boardwalk Precinct enjoys a prime site on the city’s popular hotel-lined beachfront. It is right at the pulse of its most sought-after commercial and social heart and surrounded by the energy and optimism of a host of educational institutions and upmarket neighbourhoods.

A unique marketplace of big and small brands hand-picked to be relevant and exciting for its shoppers, Boardwalk Mall will offer a refreshing array of retail with eighty stores and excellent access to national brands. Big names in retail include Checkers and Checkers Liquorshop, Pick n Pay and Pick n Pay Liquor, Woolworths, Clicks, Dis-Chem and NuMetro. In addition, the mall’s tenant mix includes, The Magic Company, Spur, Fishaways, Debonairs, Steers, Wimpy, Ackermans, Pick n Pay Clothing and the Crazy Store. The Capital Hotel Group lobby will enter from the mall. This will be complemented by all the appeal and excitement of the Boardwalk Precinct, including events at the spectacular new Sun Park Square.

Boardwalk Mall’s first phase is set to be completed and launched on the 9th of December 2021. The official opening, which marks the second phase’s completion, is scheduled for the 22nd of September 2022.