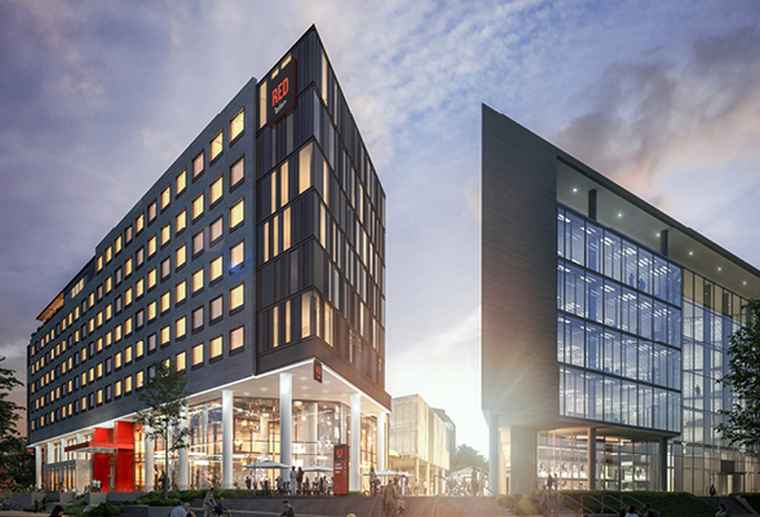 Following the success of South Africa’s first Radisson RED hotel in Cape Town in 2017, this upmarket 222 room hotel has been designed to meet a minimum five-star Green Star rating and it will open its doors to guests in June.

Developers Concor took the project through to the furniture, fittings, and equipment stage, including beds, chairs, television sets, and the physical backbone for Wi-Fi connectivity.

“The basements for the building were completed as part of the first two phases of the Oxford Parks Precinct and construction began in October 2019 with the superstructure, from the ground floor up” comments Martin Muller, contract manager at Concor.

Although the national lockdown delayed the project, construction progressed well with approximately 500 people on site at peak including contractors.

Comprising of seven levels on top of a ground floor, as well as a roof level for plant and services, the building is a concrete structure based on post-tensioned slabs with grids to suit the room sizes. At the core of the building are four lifts – a goods lift, a fireman’s lift and two lifts for guests.

The ground floor includes reception, a restaurant, kitchens, back-of-house facilities, and conference rooms with the first level housing the management offices, staff facilities and more conference space. Floors two to six each comprise of forty rooms while the seventh floor boasts just twenty-two rooms sharing the level with a pool, a terrace bar, and a gym.

“The compact design means that the majority of plant is located on the roof – the eighth level – including water tanks and all the heating, ventilation and cooling (HVAC) systems,” says Muller.

A curtain-wall system of aluminium frames and double-glazed windows characterises the east and west sides of the hotel. On the north- and south-facing sides is a face brick patterned façade with punch-out square windows.

“Most of the internal partitions are constructed with dry-walling materials of high acoustic and fire-rated properties. The specifications for these are highly technical, to avoid any noise transfer from room to room despite the compact design.”

Concor’s work was guided by two sets of specifications, one for back-of-house and another for front-of-house, he notes. The base build spec was provided by dhk Architects, while the interior design spec for the rooms was by Source IBA.

“Keeping a quality building process on track demands a constant focus on information sharing with consultants and subcontractors alike,” says Muller. “This meant weekly meetings to align our building plans with any design adjustments, so we could avoid rework that could have slowed the pace and added to the cost.”

The speed of the project was enhanced by having one tower crane on site, facilitating the work of all trades through the quick delivery of concrete and other materials to the various levels. He highlights the importance of the quality assurance and quality control (QA/QC) teams that followed production and streamlined the snagging process, so that the fit-out specialists could move in to progress the rooms.

“This allowed the production workers to fully complete their tasks before the entry of plumbers, tilers, painters, joiners, electricians and other finishing trades,” he says. Sequencing was conducted in an east-to-west direction, and these teams completed eight rooms at a time.

The Radisson RED project also provided an opportunity for Concor to conduct enterprise development among selected subcontractors. Working with three local small businesses, Concor was able to transfer skills in eighteen of the required trades, including brickwork, painting, and final handover preparation.