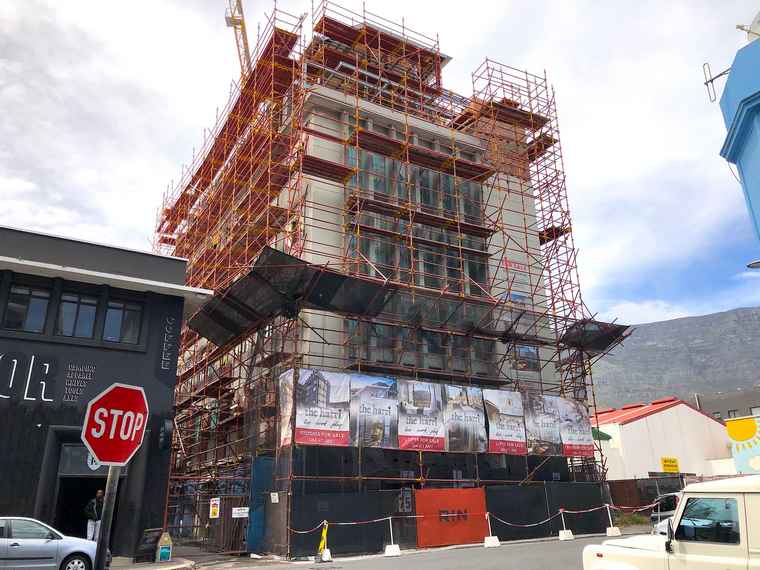 An exterior view of The Harri under construction.

The City of Cape Town launched its ‘Digital Nomad’ initiative earlier this year, an exciting new development that aims to attract remote workers from South Africa and abroad.

With Covid-19 severely curtailing travel, exciting new trends have emerged amid the crisis and one of the most significant developments is the adaption of the work-from-home concept to exotic locations at home and abroad.

According to travel publication Travel + Leisure, several countries around the world are making it easier for remote workers to become temporary residents. The appeal of the trend is that it allows employees to enjoy the marvels of a foreign land while still performing their professional duties and from the host nation’s perspective, this attracts invaluable tourism capital at a time when it is most needed.

It is not surprising that Cape Town, with its breath-taking mountain ranges, idyllic ocean views and a world class array of outdoor activities, was named among the ‘Best Cities for Remote Working’ this past January on travel website Big 7 Travel’s 50 Best Places for Remote Working in 2021.

The Mother City has long been favoured by domestic and international workers, especially younger people seeking an African adventure that caters to a higher sense of wellbeing and stimulates their personal creativity.

Companies around the world have recognised that the ability to offer a remote work option is key to their growth and sustainability.

Professionals like accountants, lawyers, techsperts and accountants are highly self-disciplined and self-sufficient, and businesses accordingly are adapting operations to offer employees opportunities for a healthy work-life balance.

In Colorado in the USA, ski lodge owners allow employees to take to the slopes during their lunch hours and on weekends which provides a great incentive for workers to follow their passion while still carrying out their professional duties.

Closer to home, many from Gauteng and other South African provinces are relocating to Cape Town in a trend known as ‘semigration’. While semigration to the jewel of the Western Cape is not new, remote work has made it that much more appealing.

City of Cape Town municipal bosses and economic agencies have been quick to recognise the massive potential of remote working to tourism, and in the past few months have upped the ante to get the word out to both the international and domestic markets that the metro is open for business.

The intention of the City and Cape Town Tourism’s ‘Digital Nomad’ Initiative is to attract remote workers, but to bolster their efforts, they are also lobbying the South African government to introduce a ‘Remote Working Visa’.

According to the City’s mayoral committee member for economic opportunities and asset management, James Vos, it is essential that the local travel and hospitality sector adapts given the devastation wrought by Covid-19. The remote worker ‘home away from home’ concept is ideal in this regard.

The remote working visa option is sure to gain momentum in South Africa and has already proved effective in other countries around the world.

The US state of Hawaii, for example, has launched a remote work programme that offers free round-trip tickets to Honolulu to the first fifty people accepted, in addition to special discounts on accommodation.

In northern Europe, the Republic of Estonia last year became the first in the European Union to offer a Digital Nomad Visa, which allows workers to live and work in the country for up to a year.

Germany has also got in on the act. Its freiberufler visa targets freelancers, and while the visa only lasts for three months, it has the potential to be converted into a residency permit.

Given the rising trend for remote work, mixed-use developments will become highly prized commodities, something that is already being reflected in Cape Town property trends.

Within the space of only a year, The Harri, a 48-unit apartment block and mixed-use property development at 75 Harrington Street in Cape Town’s East City Precinct, has sold most of its units.

Considering that property sales plummeted by up to 70% a month during last year’s hard lockdown, it is a remarkable achievement.

“We kept on selling through lockdown,” says Jeff Kleu, co-developer with Steven Lampert, both of property development company Sepia and Silk.

“Both investors wanting to buy-to-rent, as well as parents buying an apartment for their student kids, or buying a holiday flat in Cape Town, we sold to people both locally, in Zimbabwe, Germany and the USA”.

Such as been the demand, that only 14 of 42 studio apartments remain unsold, while only 2 of the 6 loft apartments are still on the market.

One of the main drivers of The Harri’s sales success is affordability.

Should buyers get a 100% bond, they are able to secure a lifestyle apartment at The Harri with a R20,000 deposit.

This allows almost anyone to buy an apartment as it lowers the barriers to entry, something which a lot of first-time homeowners struggle with.

The Harri’s unique selling point, aside from its location in the heart of Cape Town’s design district, is its blend of apartment living with open-plan, tastefully furnished co-living and co-working space, which includes fireplace lounges, a TV room with a large smart TV and access to Netflix, three dedicated Zoom (video chat) rooms, a rooftop terrace with a gas braai and mini-bar area, and hotel-grade amenities like Wi-Fi, a concierge, a housekeeping service, and 24-hour security.

For remote workers, The Harri could not be more ideal.

Boasting uninterrupted views of Table Mountain, the development offers rooms for Zoom video conferencing, as well as a conference room to book for internal teams to collaborate or conduct online board meetings.

Because there are multiple co-working areas, workers have the option of working as a group or quietly by themselves. High-speed internet means they never have to worry about missing deadlines or being out of touch with their managers.

But The Harri is just as much about play as it is work.

Aside from a braai area to relax with friends and neighbours under the gaze of Lions Head, the conference room can easily be converted to host a dinner party with friends come the weekend. Taking in the mountain over a cocktail or delicious meal is what Cape Town is famous for.

A wonderful space in the form of the whisky library lounge also allows tenants to step away from it all with a good book or enjoy a drink with other residents while watching the sun disappear over the mountain.

Sport plays a major part in people’s lives of course, and The Harri’s TV sports bar is a fan’s dream. Here, the best football, rugby, cricket, tennis, and others are available to watch on multiple screens so tenants can cheer on their favourite teams over a quiet drink or three.

With Cape Town being South Africa’s creative hub famous for its digital agencies and start-ups, The Harri lends itself perfectly to the needs of young tech and marketing gurus who are able to conceptualise their latest innovations in a modern, comfortable workspace while enjoying the best of urban living.

Its prime location also provides easy access to some of the city’s best-known restaurants, coffee bars and cultural landmarks.

Current visa free countries include some of South Africa’s key source markets such as Germany, UK, France, the US and more.

“These remote workers could work in spaces where there is access to a day-room, a pool, breakfast, lunch, parking and Wi-Fi.”

The Harri meets all these criteria.

According to Cape Town’s Central City Improvement District (CCID), Harrington Street has been at the heart of much of the East City’s miraculous revival in recent years, which previously was a gritty industrial-commercial area.

Major developments have included the upgrading of the Cape Town City Hall at a cost of R27 million, The Old Granary at R31 million, the purchase of NICRO head office on Harrington Street by a European company, Groupe SOS, for R30 million, and the opening last year of a R75 million five-star boutique hotel on Church Square.