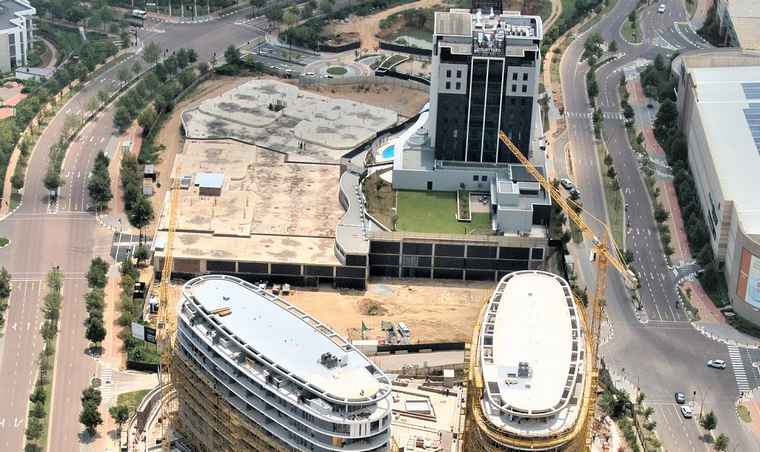 An aerial view of the construction progress of Ellipse Waterfall.

Attacq Limited and joint venture partner, Tricolt, have announced that sales of the Ellipse Waterfall development have exceeded R1 billion.

To date, 337 units have been sold in Ellipse Waterfall which is one of the largest luxury sectional title developments in South Africa. Its first phase which consists of Newton and Kepler Towers, is nearly 80% completed with the development on schedule, despite construction delays due to lockdown. Construction of the second phase is imminent and includes the flagship building, Cassini, the tallest of the four towers to be completed by the end of 2022.

“It goes without saying that the market conditions in the past year were challenging given the global pandemic and subsequent lockdowns. Yet, despite all of this, Ellipse Waterfall has continued to exceed all expectations, achieving impressive sales in record time” comments Melt Hamman, CEO of Attacq.

“Waterfall City’s unique value proposition of being a fully integrated city, where one can live, work and play, coupled with Attacq’s unparalleled ability to create spaces that inspire connection and community has positioned Ellipse as one of Gauteng’s most desirable locations offering endless possibilities to relax and engage.”

Despite historically low interest rates, the property sector still faces headwinds given the excess supply of property as well as the financial crunch facing many households. However, Ellipse’s ability to deliver access to a premium lifestyle experience that epitomises all the best of connected communities has resonated with a specific investor class, resulting in an overwhelmingly positive response from the market.

Ellipse offers 23 penthouses of which 12 have already been sold, including one valued at approx. R50 million. This three-floor penthouse comprises of a spa, five bedrooms with en suite bathrooms, walk-in dressing rooms and a cinema.

Residents will have exclusive access to the Luna Club, a multi-concept lifestyle destination, offering premier experiences and services, ranging from access to the indoor gym, a boutique spa, temperature-controlled swimming pools as well as a wellness centre. Additionally, the development has a business centre with boardrooms and conference rooms, and a cigar and whiskey lounge.

“We are proud of the work done to date and humbled by the positive response we’ve received from the public at large. In just the first two months of 2021 we sold 23 apartments valued at over R64 million” says Tim Kloeck, CEO of Tricolt.

“We believe that Ellipse’s combination of resort-style elegance, world-class amenities and accessibility to the broader Waterfall precinct has made it a compelling investment case for property investors and aspiring homeowners. I have no doubt that this project will continue to break records and achieve unparalleled success”.

As with all Attacq’s developments, Ellipse Waterfall is being built to high green design and sustainability standards. The buildings are predominantly framed in reinforced concrete. It utilises reinforced steel with a recycled content of over 90% to reduce the bodied energy and resource depletion associated with the reduced use of virgin steel. To reduce the emissions associated with transport, 20% of the project ‘s total contract value is represented by materials or products that have been sourced from within 400km of the site. Additionally, a selection of insulants that reduce energy consumption and do not contribute to long-term damage to the earth’s stratospheric ozone layer was used for all thermal insulation applications.

“The uptake has been exceptional, and the project team must really be commended for keeping this project on track despite the challenges. One of the many advantages of building a city from the ground up is that every aspect of urban planning and potential infrastructure requirements are considered and included before the actual development is even underway. Beyond Ellipse’s many attributes, I believe that investors are buying into Attacq’s vision of building a world-class city from scratch through the Waterfall development” comments Giles Pendleton, Chief Development Officer of Attacq.

Construction of phase two is expected to take 18 months and will conclude towards the end of 2022. Upon completion, Ellipse Waterfall will offer 590 apartments set in four towers in the heart of Gauteng’s fastest growing business node.