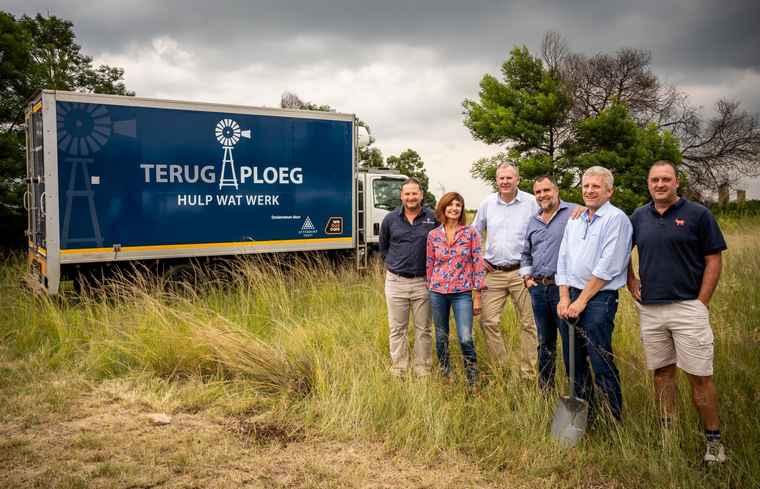 The first sod of Terugploeg’s new packaging, processing and distribution facility was turned on Wednesday, the 24th of February 2021. Strategically located next to the N4 highway near the Cullinan/Rayton off-ramp, the development’s sod-turning ceremony was attended by representatives of Terugploeg’s founding organisations, the Atterbury Trust, Vibro Bricks and WeBuyCars, as well as numerous donors, farmers, and construction teams.

Lood Bester, one of the co-founders of Terugploeg, says the idea for the Terugploeg Organisation originated during the national lockdown period: “A growing food shortage has been noticed in certain Afrikaans-speaking communities. These needy people did not receive any support from official sources.”

Bester and his friends got involved and their informal food collection campaigns quickly gained momentum. In this way, a network of farmers was also involved, from as far as Lersitele and Groblersdal, donating tons of vegetables, fruit, and venison. The produce was unloaded at Vibro Bricks in Pretoria and divided into smaller portions and distributed using Vibro bakkies to old-age homes, children’s’ homes, and schools. Institutions were verified to determine the real need and to help where it was needed the most.

Terugploeg has thus emerged as a network of benefactors whose donations are managed responsibly to provide food to vulnerable Afrikaans communities.

Over time, a bigger dream also emerged. Terugploeg’s vision is to develop as a sustainable organisation that can also provide jobs to people from these communities so that they can dream of a better future. Hope, respect, skills, and opportunities are extremely important to those in need, and Terugploeg’s help with real impact can help with this.

According to Zahn Hulme, executive trustee of Atterbury Trust, Terugploeg comfortably complements the other charity projects managed from within the trust: “About a month after Lood and his friend Herman Marx of Vibro Bricks launched the initiative, they came to an agreement with Atterbury Group’s chief executive officer, Louis van der Watt, for Terugploeg to be managed through the Atterbury Trust.”

“The advantage of the connection is that the trust has more than two decades of experience in charity project administration, as well as having the infrastructure to manage such social responsibility projects effectively. We are proud of our reputation for reliability and transparency. The same goes for Terugploeg.”

The Terugploeg business has grown so fast that it is already bursting at the seams. “We soon realised that we needed a well-equipped and easily accessible site so that we could receive, process, store and distribute large quantities of food at the same time,” explains Bester.

“We also learned that the continuity of a plate of food every other day is more important than a whole load of food that is unloaded at one time to someone who lives in a wendy house – without a refrigerator. If a farmer donates some cattle or goats, we must be able to process them into minced meat and store it so that we can selectively distribute it where necessary.”

Faan and Dirk van der Walt, the founders of WeBuyCars, have removed this big obstacle by making eight hectares of land in the east of Pretoria available to Terugploeg. “Today, we are establishing a Terugploeg head office here,” says Bester.

In addition to the food processing facility and cold storage, a vegetable and fruit garden is planned, as well as a clothes bank. Bester and his friends also want to have braai wood cut there and packaged for sale. “All these functions require labour: to take care of the gardens, to process the food, to sort, wash and iron the clothes we get in, to pack the loads of wood in braai packs … It is a long list. In this way, we also create employment for the people from the communities we serve.”

There are also plans to set up a lecture hall in the building, in which courses and talks can be presented to inspire school children and adults with practical advice and training so that they can also improve their own circumstances themselves.

Terugploeg was formally launched on the 17th of November 2020 in the Atterbury Theater in collaboration with GrootFM 90.5 as a media partner. The event was attended by about 200 commercial farmers, potential donors, and businesspeople. Offers of support have been pouring in ever since.

How you can help

Atterbury Trust issues 18A tax certificates to all who donate to Terugploeg to utilise the tax benefits of a donation.