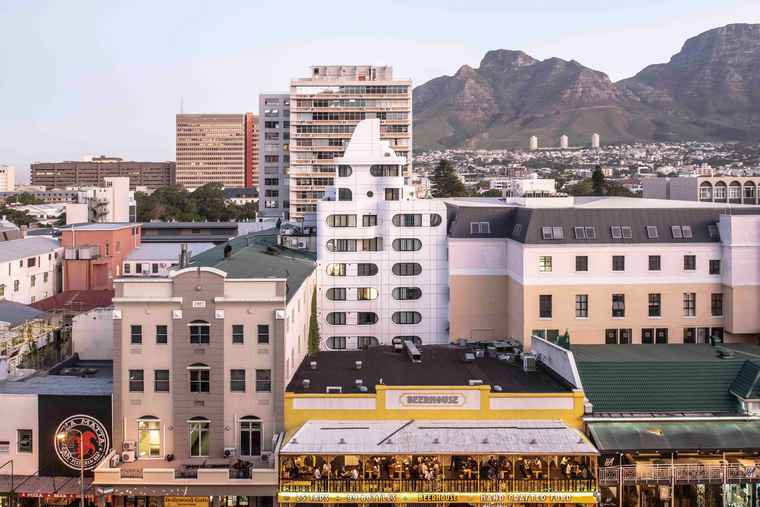 Property Wheel sat down with Robert Silke of award-winning architectural firm, Robert Silke & Partners to discuss their city centre apartment building, Tuynhuys, which has been recently nominated in the Housing category of ArchDaily’s international ‘Building of the Year 2021’ awards.

Completed in December 2019, the crisp, futuristic apartment block is set in a stoic row of historic buildings in one of the city’s most sensitive locations in the old legal district.

From a design perspective, Tuynhuys looks radically different to the typical modern South African vernacular that most property developers are delivering, what were your team’s design influences and references for Tuynhuys? Henrie Comrie recently commented on KykNET’s ‘Die Argitekte’ that Tuynhuys has a Cape Dutch influence – do you agree?

I believe Henrie was marvelling at how Cape Dutch buildings achieve beauty with simple white walls. With Tuynhuys, we took the same pragmatic parts that most apartment buildings are made from (a concrete structure with standard masonry, plaster, and paint), but we set out to sculpt these simple materials by elevating them from the mundane to the baroque. Bricks and concrete curve easily in plan and at little or no additional cost. Where architects and developers are often happy to lavish resources on large tracts of glazing and glass balustrades, Tuynhuys has relatively modest glazing and the cost of curved glass was thus easily absorbed. Tuynhuys cost no more than the ordinary and ugly commercial buildings to which we have all become accustomed.

As architects, we are interested in early twentieth century modernism in the form of Art Nouveau, Art Deco, Bauhaus, and Italian Futurism. Futurism succeeded the Art Deco style in Europe and the USA, but it never made it to South Africa where it was eclipsed by austere and ascetic architectural Modernism, which was (largely due to the cheapness of construction)  to become the dominant force in generic buildings across the country. Futurism was, in contrast to Modernism, sculptural and decorative, playful, and optimistic. First pioneered in Italy by Filippo Marinetti, Futurism was kept alive in the 1960’s by John Lautner’s flying saucer houses in California and it is today best represented in the work of Zaha Hadid Architects.

How have buyers reacted to Tuynhuys, particularly its look and feel?

Tuynhuys sold out within a week or so of its launch and squares the circle of achieving both high design and high returns. Although Capetonians are wary of new developments, design media and local influencers have lauded Tuynhuys as the future of residential development. It achieved a 29% return on the developers’ investment, but its design has also provided Cape Town with a much-loved, new icon. It has been a joy to be involved in a tall and dense new development that even the ‘not in my backyard’ types grudgingly accept.

Many of the units in the building do not have parking which seems to be a brave risk to take in a market where developers have been hesitant to offer units without parking. What are the fundamentals that have enabled you to successfully sell out this building despite its limited parking?

Tuynhuys’ 47 apartments sold out while providing only 27 parking bays, which may seem brave, but it worked (and works) really well. Most South African cities (Cape Town included) have broken and damaged urban fabric, in that streets are not yet fully developed or secure and not safe to walk in. But there are special pockets in and around Cape Town’s city centre and the Atlantic Seaboard that are highly developed and highly complete, and which genuinely support a quality lifestyle without cars. The Tuynhuys site is in one of the most sophisticated, walkable, and highly developed urban environments in the country, with numerous world-class facilities within safe walking distance. There is an opportunity to densely develop quality small sites in first-class locations – sites that might previously have been overlooked for lack of parking.

Many of the units are of smaller sizes but do not feel cramped, did you consciously design the units to be more liveable despite some being what are now termed ‘micro-units’?

I would never admit to a lover that I have a ‘micro apartment’. We have grown wary of this term. Tuynhuys’ 47 apartments range from 24m² studios to 82m² two-bedroomed penthouses, with an average apartment size of around 45m². While we are not afraid of designing small units, we put a lot of effort into making them feel bright and spacious and above-all, dignified and desirable. My personal aspiration as an architect is to never design a unit that I would not live in myself. In fact, my life partner and I bought the ‘worst’ apartment in Tuynhuys – a 24m² studio on the second floor with no views. It cost us R1.3 million and it rents for around R12,500 per month post-Covid-19. We bought it because it was the cheapest unit in the building and because it had been compensated with a gigantic curving capsule-shaped window, albeit with a view into the next building. The Victorians taught us that any outlook can look good if framed by a beautifully made window.

Tuynhuys’ international nomination is a tremendous accolade given the popularity and audience of ArchDaily’s website. Do you feel this recognition will have a positive influence on developers and encourage them to offer more differentiated products in the future?

For a commercial apartment development like Tuynhuys to even feature in an international design bible such as ArchDaily is harder than for a camel to pass through the eye of the proverbial needle. Under present market conditions (which are difficult to say the least) developers are realising that we need to compete on quality, as competing on price is a dead-end street. We are finding that since Tuynhuys, developers are approaching us to design more differentiated products, which they are finding easier to sell. To build a new building (even a commercial apartment building) is an opportunity to leave a beautiful legacy and to make the city a little better than when we found it. Even investor buyers want to buy into buildings that improve the cities in which they are located. Designers and developers need to start getting more excited about the important work we are doing in making new buildings together. The economic value of beauty has been consistently underrated (both pre- and post-1994) and it is a mistake, because the most valuable cities and the most valuable buildings around the world, are consistently the most beautiful, and it is time we learned something from that.