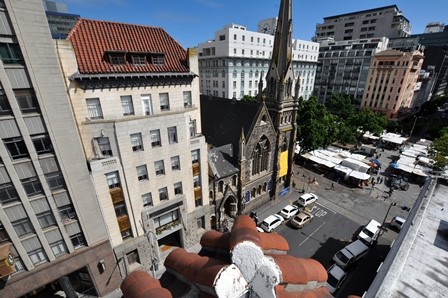 The scheduled online auction of 40 Burg Street, a landmark heritage building in the centre of Cape Town, comes at a time when the city’s once-thriving traditional business hub faces a potential identity crisis.

Kim Faclier, MD of the property division of GoIndustry DoveBid in South Africa says the Cape Town’s CBD is a beautiful urban setting with a variety of architecture and features that represent its ages and stages. “It is a historic storybook in stone, brick and concrete whose survival may rely on its flexibility rather than a rigid adherence to established purpose”.

Her company has a joint mandate with Auctioneer and Appraiser Philip Powell to sell 40 on Burg, a fine deco style boutique hotel, in an online auction which will close at 14:00pm (South African time) on Wednesday, the 17th of March 2021.

“In forty-five years in the auction profession, I have seldom seen such an appealing, iconic art-deco property come under the hammer. It is an ideal investment opportunity,” comments Powell.

The authentically renovated hotel, with only twenty rooms, is a minor player in the grand scheme of the city and its possible transformation. But for now, it offers an optimistic investment in a trophy property that is likely, in the short term, to return to full function post-Covid-19.

However, with retail and office buildings’ occupancy severely affected by the pandemic, the question is – what will happen to commercial rental space? Does the future, as proposed by some town planners, look increasingly residential for the tower blocks?  Or could it include another option applied with success – a sharing structure where intermittent need for offices in specific instances, is catered to by flexible scheduling between participating professionals.

Kim Faclier believes that a partial transformation of the CBD in its current form might in fact be the natural outcome in the face of reduced demand for commercial space. “Repurposing existing buildings to serve new imperatives is a logical response. It is begun already in some quarters of the city and how far it will go depends largely on economics and demand”.

“There is little doubt that over time, as the influence of the pandemic fades, the current trend for professionals to work from a home base, will be tempered.  It does not suit everyone, and many will want to return to the formality and prestige of an office environment.  It is no coincidence that some of the grandest buildings are corporate headquarters that reflect on the financial success of their owners and occupants”.

Kim’s division has been commissioned to find the highest bidder for the building, and she is taking a long international look at the potential market.  The outcome could be anything from a vanity back-pocket buy for a cash-flush foreigner, to a carefully considered local investment in a historic slice of one of the world’s most sought-after cities.