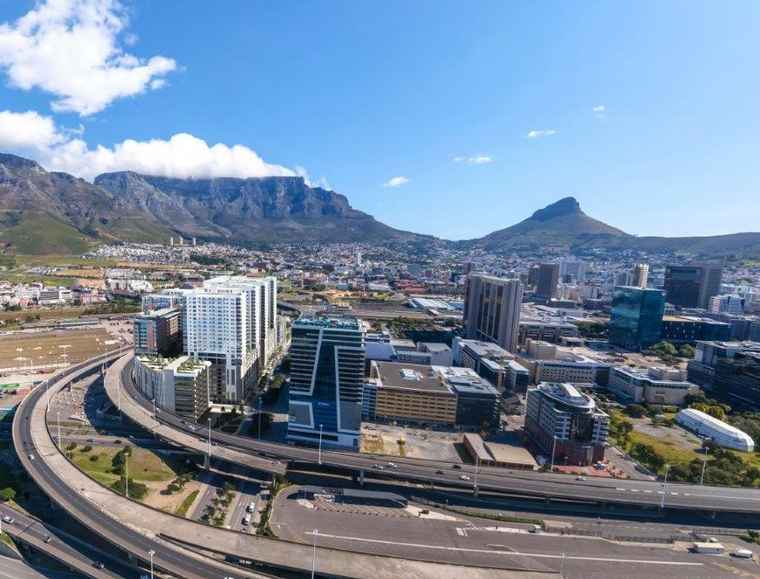 Property Wheel sat down with James Wilson, CEO of the Amdec Group, to get an idea of what Capetonians can expect from their latest development in the City, Harbour Arch, which is currently under construction.

The conceptualisation of the R15 billion inner-city precinct, Harbour Arch, began in 2012 and it has been through a number of major revisions to ensure it meets the needs of a changing market and critically, that it integrates into any future changes to the elevated freeways that wrap around the South Eastern to the North Eastern boundary of the site.

Previously owned by Transnet, the 5.8-hectare site, with 198 000m2 of development rights is located at the convergence of two of South Africa’s most significant national roads in Cape Town, the N1 and N2 highways making it a critical gateway to the city. The 24-hour mixed-use precinct is the brainchild of the Amdec Group with the development of the design having been informed from their experience with Melrose Arch which has matured into one of Johannesburg’s most desirable addresses.

James Wilson says Harbour Arch will be a significant and iconic development in a part of Cape Town’s CBD that he believes has been underdeveloped.

“The V&A Waterfront is a prominent real estate asset but there is nothing towards the southern end of the CBD and we feel that Harbour Arch will be a fantastic addition to the city, while balancing it out. We are hoping that our intervention on such a large development will encourage other property owners and developers to look at reactivating the area.”

Consisting of six individual towers, Harbour Arch will offer a 360-degree view of the City, mountain, harbour and beyond and it will be visible to motorists entering the city from either the N1 or N2 freeways.

“It is not just about the interface on the street level, it is also about what Harbour Arch will look like from the distance. We want Harbour Arch to come across positively.”

From the street level, pedestrians will experience an interactive 7.5 metre double-storey retail level with dominant wide setbacks and a 5 metre colonnade wrapping around the building.

All the buildings within the precinct will have activated facades with the fenestration implemented all the way up to the eighth-floor, articulately disguising the precinct’s above ground parking.

The street level retail will offer all the conveniences that would be expected from a neighbouring shopping centre, a mixture of larger national tenants will feature alongside local businesses with chic, upmarket and boutique showrooms. The more destination-orientated retail will dominate the eighth-floor playing host to a large-scale gym, upmarket restaurants, and jazz bars for a more leisurely experience.

The eighth-floor podium will be between 35 to 40 meters above ground with the first tower scheduled for completion within two and a half years’ time.

“When higher than the freeway, which sits between 18 to 20 meters above ground, there will be fantastic views of the city when visiting one of the restaurants. Depending on your mood, you may choose a restaurant with a view of Table Mountain on the western side or, you might want a view of the harbour on the eastern side.”

“By design, we have orientated Harbour Arch in such a way that when the sun sets over Table Mountain, you get a vesture of sunlight splashing through the courtyard area with the sun descending behind Table Mountain during the evenings.”

The eighth-floor podium will link all the buildings. Towers 1 to 6 will link via an urban bridge above ground with Towers 1,2,4, and 5 linked via a magnificent landscaped urban park.

“There is a slight advantage to the six towers in that we can moderate and change the height of the various buildings. Looking from above, in plan, our maximum height is limited to 95 meters, but this does not mean that we will build to the maximum height. We only expect Tower 1 and Tower 2 to be 95 meters with the other towers lower in height.”

Three meters above the eighth-floor piazza, Harbour Arch will feature a 5km running track that will wind its way throughout the entire precinct, like Kirstenbosch’s Boomslang.

“The eighth-floor podium will be a great place to socialize or to relax – more peaceful – and the ground floor level will be more frenetic and urban chic. You can choose where you want to be, and both will be open to the public.”

“We need Cape Town to jump into the modern era and to become more of a 24/7 city as we have seen in other cities such as London, New York and Hong Kong. With more residential housing entering the market, there is not enough convenience shopping.”

Named ‘Solly’s Folly’ after city engineer Solly Morris, Cape Town’s elevated freeways have been an eyesore for many years with parts of the incomplete freeway left hanging as a result of the funding being allocated to other projects deemed more important at the time.

“Capetonians have had a chance to seriously consider, through the initial proposals, what possibilities existed for the redevelopment of the Foreshore. These were largely divided into two schools of thought – to leave the freeways in situ and to construct a precinct around or between them or, to sink them to ground level or underground.”

It is not common knowledge that Amdec owns the land directly below the stretch of the elevated freeways which are built on the servitudes that cover around a third of the Harbour Arch site.

Amdec chose to design an urban park to sit directly below the elevated freeways. Offering free access to the public, it will provide a safe, secure, and well-lit space which will include a bike park, a skateboard park and climbing walls, surrounded by bright, colourful mosaics and artistic urban “graffiti “art.

“We have tried to develop our ideas on the basis that we do not build any real estate of substance below the freeways and in doing so we have enabled, in perpetuity, the opportunity for the City to demolish these freeways or to develop underground or on-grade parking, should they deem it a worthwhile cause.”

“The City of Cape Town needs to reconsider its own Foreshore transformation project. Cape Town is in desperate need of a brave new vision that aligns with international trends and best practice, one that embraces the future without ignoring the past, one that both recognizes cultural diversity and unifies our people.”

Harbour Arch was initially approved by the Municipal Planning Tribunal in late 2019 but the project was appealed by social and housing activists who argued that it lacked the inclusion of affordable housing and that the development was ‘unashamedly exclusive’.

In August 2020, the City of Cape Town dismissed all appeals against Harbour Arch granting Amdec approval to proceed with the development with no obligation to develop any affordable housing units.

“The City of Cape Town does not have an inclusionary housing policy which I think has become a bug bear for most social housing activists. It is a difficult balancing act for the City to be able to encourage business and property development whilst being obligated to provide affordable housing”.

The merits for inclusionary housing policies are obvious; the need to right the wrongs of the past is imperative when it comes to social justice and equality by supplying housing for the previously disadvantaged communities.

The arguments against inclusionary housing is that it could have negative consequences in that it might discourage smaller and medium-sized developers from participating in residential property development in the CBD and throughout the wider Cape Town area.

“It is a difficult balancing act for the City to be able to encourage business and property development which leads inevitably to employment and the circulation of capital throughout disadvantaged communities versus their obligation to provide affordable housing.”

The definition of housing in the South African context is that subsidized housing (known as RDP housing) is provided to people who do not have the ability to earn an income or who produce exceptionally low family incomes, frequently below R3 500 per month.

“This makes it virtually impossible for developers to participate in this environment because it is not economically viable for a private developer to supply this market.”

Social housing is governed by an act of Parliament. If beneficiaries register with the appropriate authorities, there are opportunities to receive subsidies towards the cost of social housing at a certain price.

To qualify as tenants of the Harbour Arch affordable homes, tenants must have formal employment with a history of employment.

Tenants will pay rentals of between R5 000 to R6 000 per month with cost-efficiency initiatives and design intents in place including energy efficiency and grey water usage to dramatically reduce the cost of occupation.

Amdec hope to deliver between 150 to 200 hundred housing units on Harbour Arch’s completion but the group have publicly committed to deliver not less than 100 housing units.

“We believe we are transforming an uninspiring site into an iconic gateway site which will put the city on the map. Harbour Arch will set a benchmark for the future development of the Culemborg site which sits to the south of the property. If we can develop Harbour Arch to set this benchmark for how the city should be expanded, then Transnet (or any future successor or title) will be inspired to do something similar.”

“The entire precinct development process will take between eight and ten years and it will be a huge confidence booster for Cape Town and for South Africa. We are quite proud to bring this scheme to the city and we are happy to debate the merits of Harbour Arch.”