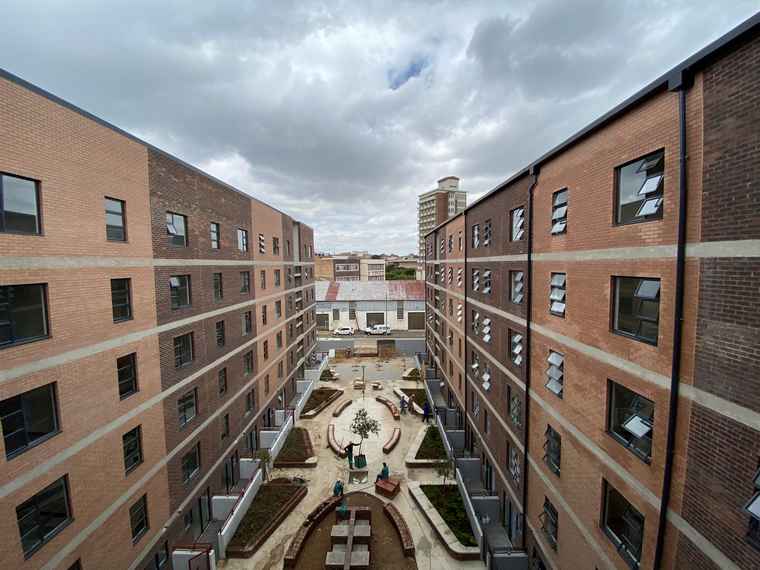 Designed by architects, Local Studio, it has successfully contributed towards addressing and changing the spatial injustice legacy which haunts our cities.

Property Wheel sat down with the project architect, Amy Leibbrandt to discuss Vuja De, its interesting story and how she believes architects can play an important role in redesigning our cities to provide quality, affordable accommodation to all South Africans.

How did Local Studio and Ithemba Property partner on Vuja De?

Propertuity, the main developer of Maboneng, owned the Vuja De site five years before Ithemba Property took full ownership in 2019. In 2016 Local Studio completed a housing project for Propertuity in Maboneng called Situation East. A Japanese architect originally did proposals for Vuja De but the creation of these iconic buildings by international architects was halted and the shift towards the creation of high-yield affordable housing began. This is where Local Studio came onboard.

In 2018, Propertuity took Ithemba Properties on as a client and they shrunk the building. The brief was to create 17m2 units like the basic units that were rolled out in Jewel City. Unfortunately, Propertuity liquidated that year and Ithemba Property bought over the project and we began the construction process in March 2019.

It is quite intriguing how developments in inner city Johannesburg shift from creating Maboneng’s iconic buildings to what we are now seeing – the rise in precinct development from Ithemba Property with Jewel City and the Absa Towers Main.

How has Vuja De differed from Local Studios’ previous projects?

I see Vuja De as a growth point for Local Studio as we are shift to a bigger market, working with great developers and construction companies such as Mike Buyskes Construction. Our previous, larger affordable housing projects leant more towards the renovation of office buildings. One that stands out is Braamfontein Gate which was the old TOTAL headquarters. We have completed a great deal of office to affordable housing conversions and I think we are going to see this happen more often, especially with a shift towards working from home due to the pandemic leaving commercial property vacant.

Walk us through Vuja De’s concept and the design. What was the brief and did this evolve or change at all during its process?

The brief was quite simple. It involved putting in as many units and basics as we could. Originally, we were briefed to include 17m2 and 34m2 units, but we went bigger with 18m2 and 36m2 two-bedroom units. The design was not driven so much by the brief, but it was driven more by our agenda of creating the urban interface and the communal spaces for the tenants. One interesting element that makes Vuja De different is the ground floor units with feature gardens which is new for Ithemba Property’s portfolio. They were quite cautious about whether these types of units would be rentable, and these units were the first to go with the ground floor fully let now. Our main objective with this project never changed. It was always focused on the community spaces and the interface.

Vuja De features three buildings; the two new buildings and the existing building which we renovated with two public parks between the two courtyards. During the design process, we had to lose one of the parks due to parking requirements for a city development of this nature where previously, we had not allocated any parking.

The courtyard and the interface are the prominent features. Is there any symbolism associated with these features?

It is not so much symbolism but rather our understanding of the use of space. The ovals are the centre collective points with the one side featuring braai facilities with a focus on the adults and the other side is a green area for play and recreation with a focus on the kids. There is a progression of private space of the units with the gardens, to create separation and privacy for the tenant but remaining connected with the courtyard as an extension of the units. The courtyard lends itself to the community and to moving through the building. With the interface, we have two shops in two live-work units. Originally there were four shops, but we struggled to attract tenants and it was not feasible, so we turned these two empty shops into a tenant gym that is directly on a street. I recently visited Vuja De and it was great to see how the shop interacts with the street. Having these anchors truly integrates the building with how it is situated in New Doornfontein.

Were there any challenges with Vuja De’s site or the design?

For me, the challenges lied more within the cost of the construction and the town planning. When we started on this project, we submitted and received approved plans under the Town Planning Scheme of 1979 which did not require parking for this type of project. Due to the building shrinking and a few minor changes, we had to resubmit the plans to Council who requested that under the 2018 Town Planning Scheme, Vuja De would require parking and we would need to incorporate approximately 100 parking bays. At the time, we were already on level four of construction of the building which meant there was no way that we could include these parking bays. We had to re-negotiate with Council due to our plans having been approved previously. Through the negotiations, Council eventually approved our original plans. In this instance, this is where I believe architects have an important role to play in negotiating between Council and the developer.

Another challenge was the prominent courtyard. It is not a standard design due to its ovals and the curved benches. We went through four iterations and because it needed to be custom made, it was quite costly. We investigated different construction methods, which all proved to be costly with a real chance of losing the curves which would have been less successful and a wasted opportunity. The main contractor stepped in and offered to make the concrete elements for the brick benches, these were made in their construction yard which they brought to site. If it were not for this, we would not have the courtyard as it is built today. It comes down to the relationship between the architect and the contractor, understanding the agenda and working together to bring a project to life. Cost is always a big challenge that drives a design. Unfortunately, there were a few elements that we had to let go of due to cost. We needed to carefully consider where to apply the effort and the extra bit of money, working within a balance of budget constraints and the project agenda.

How do you believe Vuja De will contribute to the Maboneng precinct rehabilitation?

In a sense, I believe that Vuja De already does. I was there about two months ago, and I felt safe at night. Originally, I would have been cautious to go into the city alone at night. The building is situated on quite a dark street and the building across the road is vacant. Now, the building lights up with the circulation of the vibrant street and the interaction of the community. Previously, it was a one-storey with high walls and limited street interaction or, a contribution to the city. I believe that this will slowly start filtering out to the neighbouring buildings.

How important is it for architects to get involved in projects like Vuja De to provide quality, affordable accommodation for South Africans?

It is crucial. The value not only lies within the building but also within the negotiation of space, cost, time, and maintenance pressures within extremely strict constraints. Working between the Council, the developer and construction, having an agenda to contribute towards the city is key. Most of the time, the brief is to create a basic unit with certain number targets and what an architect does, is to compose the basic units with the city. With Ithemba Property bringing Vuja De to market and focusing on providing affordable, quality housing, this contributes to the development of our city, creating a more spatially just environment by providing the community with the access to the city and its resources.

I also believe that it is important for architects to be challenged and to find new innovative ways. We need to self-reflect and to think critically about how we can improve every project, how we can create smart densification and, how to help redirect the property entrepreneurs to renovate developments within our cities to be more spatially just.

Architects have this ability to push this agenda and to bring this forward in our cities. Vuja De has summarized the shift in development in Johannesburg and I am grateful for being able to be a part of it.