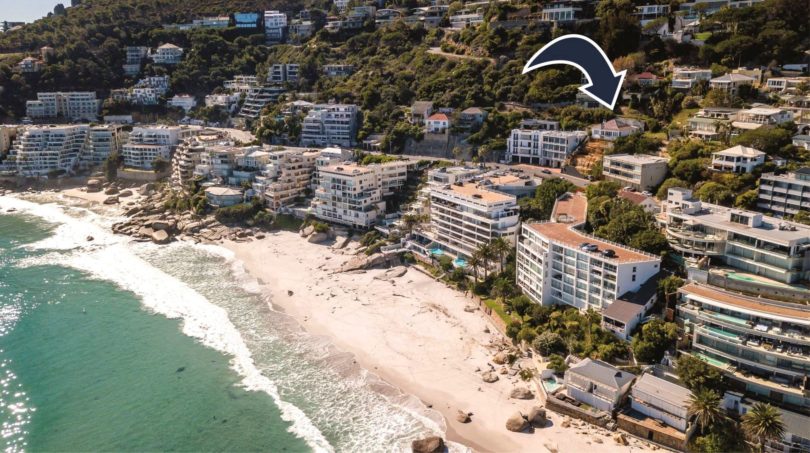 1st Beach, Clifton, - the business zoned site on auction for the proposed hotel.

Local and international developers will be virtually bidding on a Clifton business zoned site on the 8th of October for what could become the only luxury hotel on the Atlantic Seaboard with its first hostelry in almost forty years.

Plans for an eighteen-suite boutique hotel spread over several floors above ground and a further three basement levels have been drawn up for the 543m2 site on the mountain side of Victoria Road opposite 1st Beach says Director of High Street Auctions, Rodney Beck.

“A major design feature of the hotel plan is a fully-automated parking garage for twenty-one vehicles with seamless hydraulics performing an intricate valley behind glass walls to shift luxury vehicles in and out as needed” he says.

“A further 235m2 has been incorporated into the plan for entertainment, dining, and reception spaces as well as back-of-house facilities. There is also a retail element on the ground floor, ideal for a coffee shop or a private concierge lobby.”

Beck says that years have been invested in planning and application processes to bring this unique hotel project to the point of fruition.

“The property has been rezoned to General Business 1; a demolition certificate has been obtained for the old cottage that remains at the rear of Erf 337 and excavation of the front portion has already begun. The Council has granted approval for a portion of Erf 145, measuring 76m2 to be sold to the owners of the adjacent Erf 337 for a price of R3.5 million, escalating at 8% per annum from the 1st of September 2018. This portion must be consolidated with Erf 337.”

Beck says that although this acquisition is not compulsory, it allows the developer to build a bigger scheme with more parking and a larger footprint. He has revealed that the new developer will for the first time have the option of purchasing a smaller vacant erf on the Apostle Stairs, adjacent to the right rear portion of the proposed hotel site.

“This lots has always been privately owned. It is currently zoned Single Residential 1, but the possibilities are endless for a developer looking to extend a hotel’s leisure facilities over an additional 445m2. The chances of these two tandem lots ever coming to market at the same time again are slim to none.”

According to 2020’s SA Wealth Report published in April by New World Wealth, the stretch of Victoria Road through Bantry Bay and Clifton where the planned hotel site is located, is ranked as the most expensive street in the country, with pre-Covid-19 real estate prices averaging out to around R80 000m2.

The report also noted that Clifton takes the top ranking as the most expensive suburb in South Africa.

“Clifton is the French Riviera of the southern hemisphere. It is a global hotspot to see and be seen, which does not render it impervious to overall downward trends in the real estate sector but does increase its desirability as a safe harbour investment in very turbulent times”.

“More encouraging still from a tourism investment perspective is that South Africa has emerged as the most sought-after international travel destination in the first post Covid-19 survey of its kind”.

“It’s indisputable that our world has been changed by this pandemic. International borders are reopening, though, and people will travel again soon – perhaps slightly more selectively than before – but travel they will, and Cape Town will reap the benefit” he concluded.