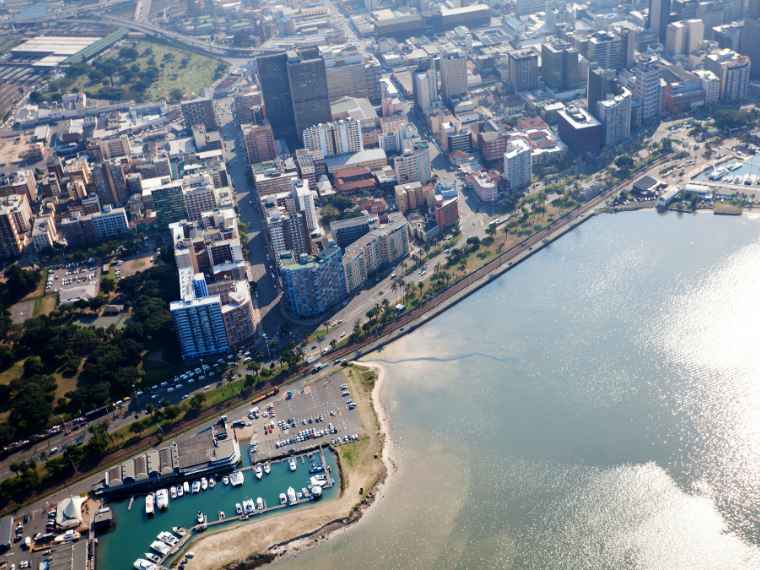 An aerial view of Durban's CBD.

eThekwini’s Avoca landscape is set for major change after a historic agreement was recently signed with Main Street 57 to incentivise the Brickworks Development in the Avoca Development Node which sits north of Durban.

The node measures approximately 350 hectares with a potential capital investment of R10 billion.

Deputy Mayor of eThekwini, Counsellor Belinda Scott explained that in terms of socio-economic transformation, the Brickworks development will significantly contribute towards reducing unemployment.

“An estimated 23,000 construction jobs and 13,500 permanent jobs could be created. The location of the Brickworks development, along with the other developments in the Avoca Node, such as Caneridge and Rohill (Northfields), will create much needed employment opportunities for the surrounding communities like the Mt Moriah, Duffs Road, Inanda and KwaMashu residential areas. It is one of the few remaining large infill sites in the area”.

Investec Property have committed to ensuring that all contractors during the construction phase of the development will be required to create opportunities for local enterprises wherever possible. This is to ensure that the Brickwork’s development contributes meaningfully towards job creation and socio-economic transformation.

“As part of the city’s strategy to create a conducive environment for investment, it offers a substantial rates rebate to investors and developers. This forms part of City’s Rates Policy and Economic Development Incentive Policy (EDIP) that aids investment in our city that contributes to job creation” commented Deputy Mayor Scott.

The EDIP aims to position eThekwini as a preferred investment destination and it focuses on supporting new investments based on their potential and future contribution to economic growth, spatial regeneration and job creation within the municipal area, in accordance with the municipality’s strategic objectives.

She explained: “in order to incentivise the Brickworks development and realise the anticipated socio-economic benefits resulting from the development, including the increased rates income for the City once the development is undertaken, a rates rebate has been agreed upon for the development period.”

Investec Property intends to develop the site in three phases of approximately thirty hectares of developable land in each phase. The proposed development will require an investment of over R1 billion in infrastructure development which will take over fifteen years to develop. This will result in significant risk to the developer, with respect to potential rates increases on the undeveloped phases of the project while it is undertaking the development of the first phase.

To address these risks and incentivise Investec Property to proceed with the development, a five-year rates rebate has been proposed for each of the three phases of the development. Although there will be an anticipated rates rebate of R34 million over the fifteen year period, it is estimated that rates income for the site will increase from its current R3.4 million per annum to an estimated R190 million per annum post full development, in addition to the other socio-economic benefits to be realised. The intention is for the rebate to cease on an incremental basis as an Occupation Certificate is issued for any completed top structure development on a site-by-site basis.

Investec Property Joint Chief Executive David Rosmarin commented: “Through our partnership with Corobrik, who for more than 100 years have provided eThekwini with bricks to build some of the most iconic buildings in the City, we were able to identify this unique development opportunity. The collaborative nature of this undertaking was made possible through eThekwini’s innovative establishment of the City’s ‘One Stop’ Catalytic Project Unit alongside their pro-active and unique Rates Rebate Policy, aimed at encouraging development. eThekwini plays an integral role in the economy of South Africa, serving as the logistics hub and main entry port into the country. The Brickworks Development will further strengthen and enhance this role while stimulating regional economic development. Investec Property are proud to be a part of this unique development and we thank Mayor Cllr Mxolisi Kaunda and City officials who contributed to bringing this project to fruition.”