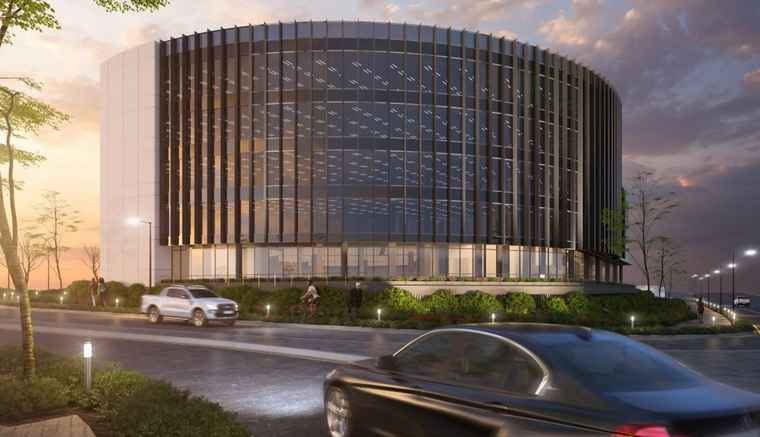 An artist's render of Sable Corner.

How does Sable Corner differ from a development that you would have done five years ago?

A couple of things that are different would be that we increased the generator capacity (to cover the majority of the building and not just emergency lighting and lifts), this allows Tenants to keep on working regardless of load shedding, and lift speeds are also above industry standards allowing quicker movement with-in the building.

Airconditioning, fire escapes and ablutions allow for densities of 5.5m2 per person making the building suited to more flexible working environments with more workspaces being able to be accommodated in smaller areas than older buildings allow for.

Sable Corner also has more glazing than typical allowing more natural light into the building with out necessarily increasing the heat load (much of the glazed elevation is south facing).

The design has a curved façade, what was the thought process behind this and the design of the building in general?

The unique curved façade (with vertical fins) opens up unobstructed views of Table Mountain, Signal Hill and Table Bay to the South East and make the building a landmark in the Century City. The highly original form of the building, designed by award-winning dhk Architects, includes a glazed circulation staircase and lift lobby that link the convex-shaped section of the building to a rectangular appendix, allowing for economical office design without compromising on the spectacular curved façade.

We are aiming for a minimum 4 Star rating through the Green Building Council of South Africa. Rabie have already developed six five-star rated green buildings and seven four-star rated green buildings in Century City and we are working towards our vision of making Bridgeways Precinct the highest concentration of Green Buildings in the entire country.

Can you chat to us about the benefits of Sable Corner’s location?

It’s situated on a very prominent corner in Century City and it can be easily spotted off the N1 highway with its high-visibility position on Sable Road – one of the primary routes into Century City. This not only lends itself to a most unique brand visibility opportunity but, from inside the building, you have access to incredible uninterrupted views of the City and Table Mountain.

Access to an amazing campus lifestyle that is unique to Century City is a big plus, within the Bridgeways Precinct most of what you need is a short walk away – from coffee shops, conference facilities, hotels, food stores and much more.

Sable Corner’s strategic location encourages the use of public transport to cut carbon emissions: bus, MyCiTi bus and minibus taxi routes leave from a public transport hub less than 500m away while Century City station is just a few minutes away by foot.