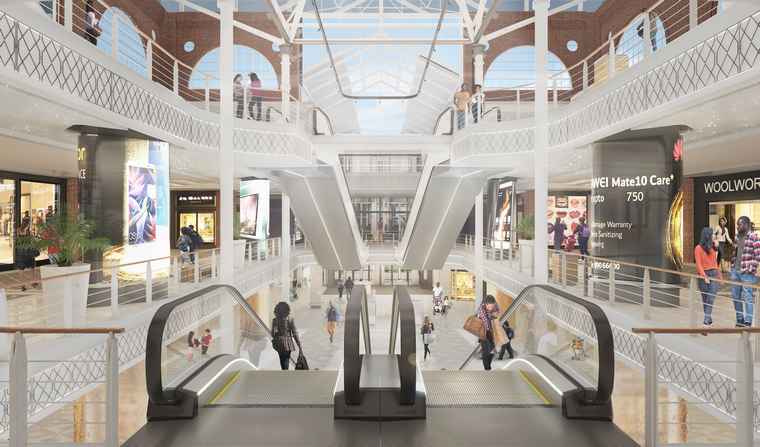 The first phase of the V&A Waterfront’s R180-million extension to the Victoria Wharf Shopping centre has been launched.

The ten month redevelopment of the Victoria Wharf wing (adjoining The Table Bay Hotel) has expanded the retail area to 4,000m2 of shopping space by adding a third ground floor level. All three open balcony-style levels wrap around and overlook the ground floor promotional court. The effect is a light and airy space enhanced by the natural light which flows in through the atrium roof which took eight months to construct.

With the completion of phase one, several new food and beverage and other retail tenants will move into the space. In phase two, the existing Woolworths store, which now expands over three levels, will undergo internal fittings which will require a further two months with expected completion by the end of this year.

For added convenience, the new retail area will offer on-grade parking on the lower level, while six new escalators and two new glass feature lifts will link the different floors and improve the pedestrian flow. To fit the lifts and elevators, the construction team had to remove 500 tons of 205 cubic meters of concrete – just over the weight of one Boeing 747 – and install 7.6 tons of rebar. 405 meters of strapping was needed to cut the slabs, while 67 tons of structural steel was installed with 154 clamps on post-tension cables.

Named as the greenest shopping centre in the country, some of the Victoria Wharf’s environmental features include; the use of grey water, low potable water consumption and tenants signing a Green Lease. The lease tracks a tenant’s energy and water consumption and also incentivizes recycling.

The ivory coloured floor tiles (with a star pattern) were custom designed, with each tile weighing 100kg and requiring 405m of strapping just to cut the slabs. The overall effect is that of a contemporary polished concrete floor.

By the end of phase one, sixteen subcontractors employing 162 people had worked 48,515 man hours over an eight month period.

Speaking about the new retail offering, the V&A Waterfront’s Retail Executive Alex Kabalin, says, “The development will add a new experience to Victoria Wharf. We are thrilled with the final result as well as the new retail and food and beverage mix, and we are certain visitors will agree. We look forward to welcoming them.”