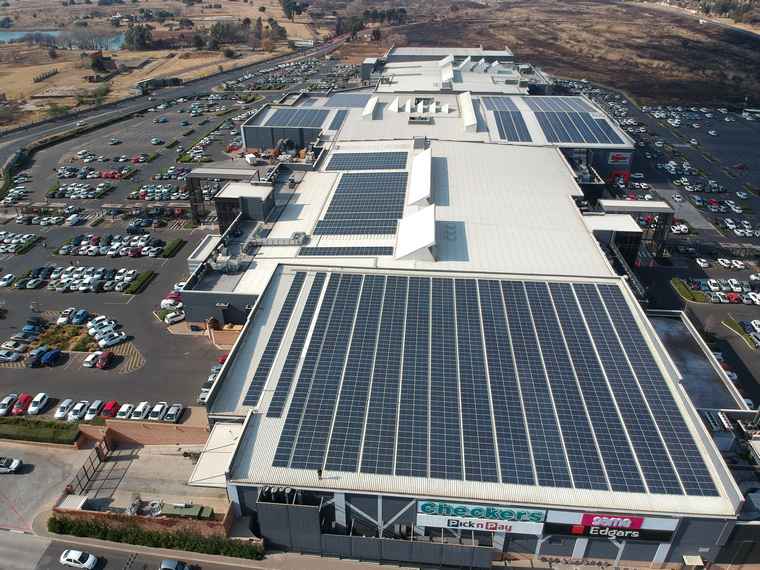 Flanagan & Gerard Property Development & Investment has announced its investment in more than R16 million to install state-of-the-art solar plants at its malls in an effort to save energy and significantly reduce its carbon footprint.

A further solar plant for Mall of the North (co-owned with Resilient REIT and Moolman Group) is expected to be live before the end of the year, and capable of generating an additional 1 MVA. Added to that, Highveld Mall (co-owned with Resilient REIT, Mogwele Investments and Retraction Props) will introduce solar to its energy mix in early 2020, increasing the total solar energy capacity at Flanagan & Gerard’s retail assets to more than 5MVA.

“Energy saving and going green are primary drivers for us, as we bring these shopping centres in line with the Flanagan & Gerard philosophy of making a positive environmental impact by using renewable resources,” says Paul Gerard, MD of Flanagan & Gerard.

He adds, “Although South Africa is growing at a rapid rate in the alternative energy sector, we are not growing fast enough to relieve some of the pressure currently experienced by Eskom. There is uncertainty around Eskom and its ability to meet demand. We firmly believe that, as the private sector, we have a responsibility to continue to accelerate the expansion of renewable energy. The reduction of CO2 emissions is a major benefit of using alternative energy sources, and having our own independent supply comes with the added benefit of having more control over that supply.”

Four of the centres have rooftop solar installations, while Vaal Mall has the only carport installation. “It is worth noting that since the installation, Vaal Mall’s entrance five, where the carports are located, has gone from being the least used parking area and entrance to the busiest,” says Gerard.

Currently, the National Energy Regulator for South Africa grants independent solar generation for installations up to 1MVA. Anything over this requires a generation license, and only a certain number of licenses are issued per year. Flanagan & Gerard are in the process of applying for additional licenses for their malls to ensure they can add on to current installations in future.

Other Flanagan & Gerard retail centres including Ballito Junction (co-owned with Menlyn Maine Investment Holdings), Thavhani Mall (co-owned with Vukile), Morningside Shopping Centre (co-owned with Grapnel Property Group) do not yet have solar installations in place, but Gerard says that the company will be looking into alternative energy supplies for these malls in future.

“Ballito, which is located at the coast, is not as favourable a candidate for solar energy generation as our other malls. We do, however, still believe there is an investment case, and have started to investigate this. Getting the approvals to install alternative energy at Thavhani Mall in Limpopo is proving to be complex, but we are continuing this process. Morningside Shopping Centre in Sandton, Johannesburg, will most likely see the addition of rooftop solar in conjunction with another exciting project that will create meaningful social and environmental benefits for its community.”

In future, Flanagan & Gerard is committed to designing all its new developments to include rooftops with the structural specification necessary to handle PV panel loads.

“As a company, we are passionate about our world and looking after its limited natural resources. Reducing the carbon footprint of our shopping centres and future developments even further, and will start right from the initial design and planning phase, from the efficient orientation of buildings to maximise on natural light and to allow for the most efficient solar return,” Gerard says.