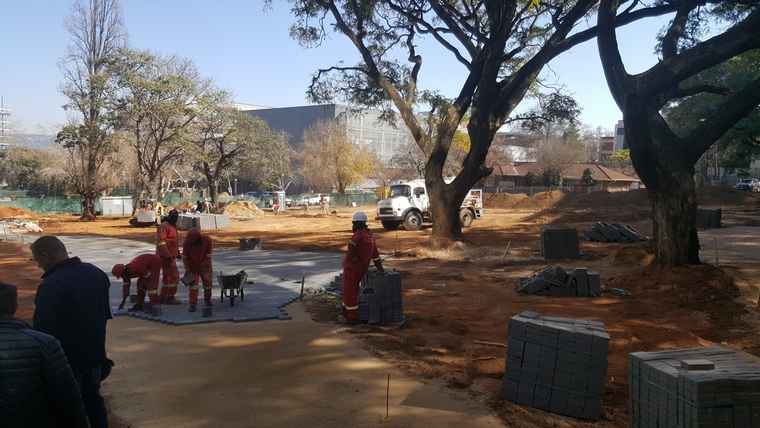 A new pedestrian walkway being constructed that will link the south-eastern corner of the Library Park to Sturdee Avenue.

Work on the park started during June 2019 and will be completed over a period of three months.

This public private partnership with will the Johannesburg City Parks & Zoo will see Park Central’s body corporate maintaining the Library Park for a period of five years. The park lies in the shadows of Park Central, Redefine’s residential development in Rosebank.

“Having a park in midst of communities enriches lives. This blend of partnership, where we will continue to look after the park dovetails into our purpose of creating and managing spaces in a way that changes lives,” says Mike Ruttell, development director, Redefine Properties.

“Rosebank is one of the fastest growing suburbs in the city attracting a large number of corporates as well as new residents due to its accessibility, well-developed transit network as well as the quality of life it affords. Once completed, the revamped Library Park will stimulate the local economy, enhance property values, instill a sense of civic pride and help attract new businesses.”

Rosebank’s proximity to Sandton, Illovo as well as Melrose adds to the suburbs appeal which is already an established landmark for its lifestyle opportunities. The Library Park adds to Rosebank’s growing reputation and will give the public crucial access to park amenities.

Improvements also include a new boundary fence along Keyes Avenue and the conversion of a redundant parking area to green landscaping. Picnic tables and benches are also being added.

A new pedestrian link to Rosebank Mall is being established via the southern end of the park. This aligns with the Johannesburg City Parks & Zoo ’s vision to pedestrianize Rosebank and to encourage the use of public open spaces by all who live, work and visit Rosebank.

“This public private partnership with Redefine Properties is a win-win as it alleviates the pressure on the Johannesburg City Parks & Zoo . There are a number of parks that need such level of investment and corporate commitment, and we are confident once the Library Park is opened it will serve as another a good case study of what can be achieved though like-mindedness,” says Louise Gordon, Executive Manager of Business Development, Johannesburg City Parks & Zoo.

“This partnership will not only restore the park infrastructure but also enhance our environment, introduce people to an outdoors and active life while assisting the local economy.”