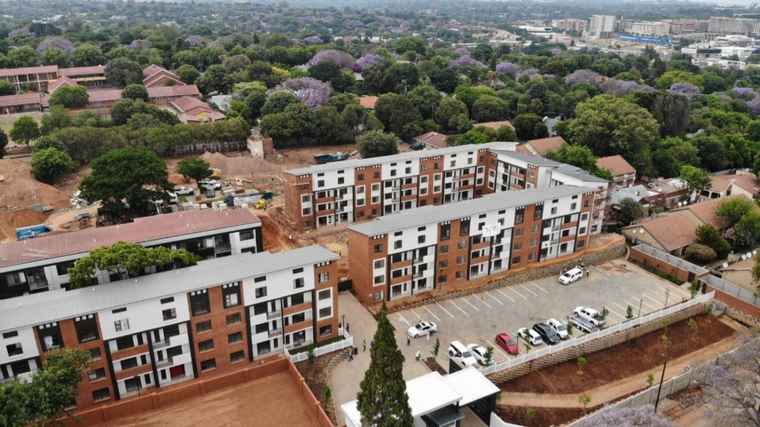 A drone's view of The Village.

Africrest Properties has announced that Herman Mashaba, the Mayor of Johannesburg, will be attending the opening of their latest middle income residential development known as The Village, one of the largest residential and school developments along the Corridors of Freedom.

Situated in Bramley, this landmark development started in 2014 with the purchase of property which consisted of dilapidated hostel-style accommodation.

The Mayor’s office stated that “the derelict and run down 30,000m² property in Bramley was developed with eager input from the City’s Development Planning Department. The City saw a great opportunity to have input on the layout and design of the development to ensure a more responsible and responsive end product that strikes a balance between the pressure of the area-based transformation and existing communities.”

At a fraction of the price, Africrest has developed rental apartments with finishes and facilities that mirror those of a Sandton luxury apartment, only two kilometres from Melrose Arch and 800 metres from the Louis Botha Avenue Rea Vaya Station.

“We have already completed phase one of The Village which consists of 240 apartments and by the end of phase two the total development will have 530 apartments.”

Africrest is currently developing three other sites in Johannesburg and by June 2019, the company will have developed 800 apartments and a portfolio of approximately 2000 apartments by December 2020. The group’s development consists of one and two-bedroom apartments and rentals which range from R3 500.00  to R8 000.00 per month.

Africrest is committed to developing within the city’s urban design framework. Liana Strydom, the of City Johannesburg’s Transformation and Special Planning Department thanked Africrest “for being a developer that is building a better City”.