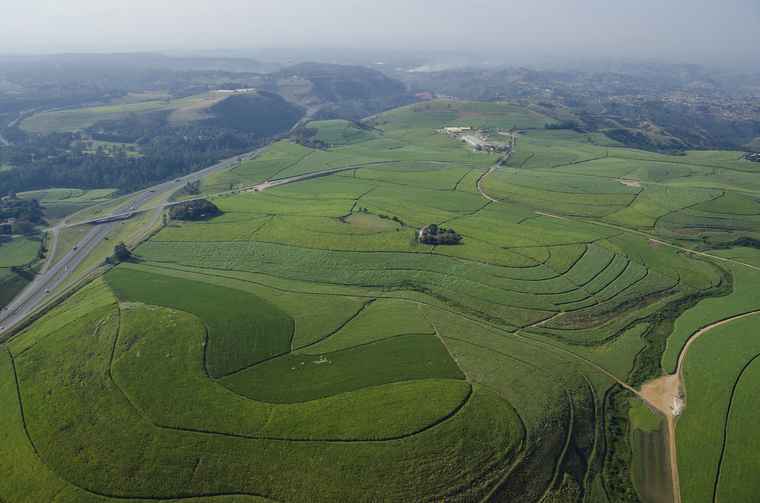 An aerial view of the Ntshongweni Urban Development, scheduled to begin construction in late 2019.

The first phase of the Ntshongweni Urban Development region will play host to a 85 000 square meter regional shopping centre aptly named the Mall of the West.

This new retail offering will cater to Durban’s under serviced western suburbs and surrounding areas which is expectes to boost the area’s socio-economic development. Development rights for the Urban Core, the first precinct, are already in place with the preliminary infrastructure upgrades expected to commence early next year.

Located thirty kilometres west of Durban on the N3, the 2000 hectare Tongaat Hulett project is the next logical urban precinct to unlock significant economic activity for the west sub-region. The Mall of the West comprises of phase one of the development.

The mall’s architectural aesthetic will use connected spaces that create a positive and symbiotic relationship between the built and natural environments. Nicola Muir, spokesperson for Fundamentum Asset Managers, developers of the mall comments: “The Mall of the West will follow a concept plan like uMhlanga’s successful Gateway Theatre of Shopping and is at the forefront of building a whole new town to the West of Durban.”

Development of the new mall is expected to proceed in late 2019 with completion scheduled for early 2022.

“The road upgrades are necessary to accommodate future growth to be followed by the Mall of the West which will simulate the original Gateway Theatre of Shopping in its ability to drive this new precinct’s urban and retail core.”

The retail offering will form the heart of the town centre, evoking a unique lifestyle destination that seamlessly links indoor and outdoor spaces. Muir adds, “The mall will give residents and visitors a cutting-edge retail and entertainment facility that has a distinct emphasis on lifestyle-enhancing elements.”

The construction of the entire Ntshongweni Urban Development will span fifteen to twenty years and Tongaat Hullet anticipates that the project will create 35 000 permanent jobs and 400 000 short-term construction jobs. The development is expected to generate R700 million in annual rates for the eThekwini Municipality and R5.1 billion in annual tax revenue.

“New destinations like Ntshongweni that facilitate considered, inclusive and integrated urbanisation to holistically uplift communities through meaningful development while at the same time preserving the integrity of the environment, make significant inroads into changing the country’s socio-economic landscape. Just months away from breaking ground, we look forward to working with our communities and partners in bringing this bold vision to fruition.” Deighton concludes.