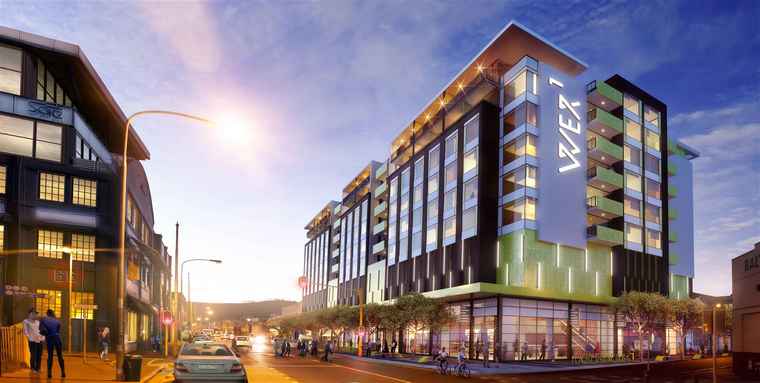 A artist's impression of the exterior of the Stock Exchange hotel in Woodstock.

Cape Town’s Woodstock will soon boast a new hotel, to be managed by Newmark Hotels, Residences, Reserves & Lodges. The hotel will be known as the Stock Exchange, forming a part of the WEX1 development – a mixed-use building that will additionally comprise of residential units, restaurants, a swimming pool, a gym, an entertainment deck and retail outlets.

The greater building is located on Albert Road opposite the Woodstock Exchange and in proximity to The Old Biscuit Mill; designed by Vivid Architects and developed by Signatura, in partnership with Indigo Properties.

“The Stock Exchange’s refreshing look and feel will certainly align with Woodstock’s trendy atmosphere. We are confident that guests are going to fall in love with this captivating hotel, which will form part of Newmark’s Residences Portfolio. We look forward to its opening with great anticipation” commented Neil Markovitz, MD of Newmark Hotels, Residences, Reserves & Lodges.

The Stock Exchange is scheduled for completion in March 2019.