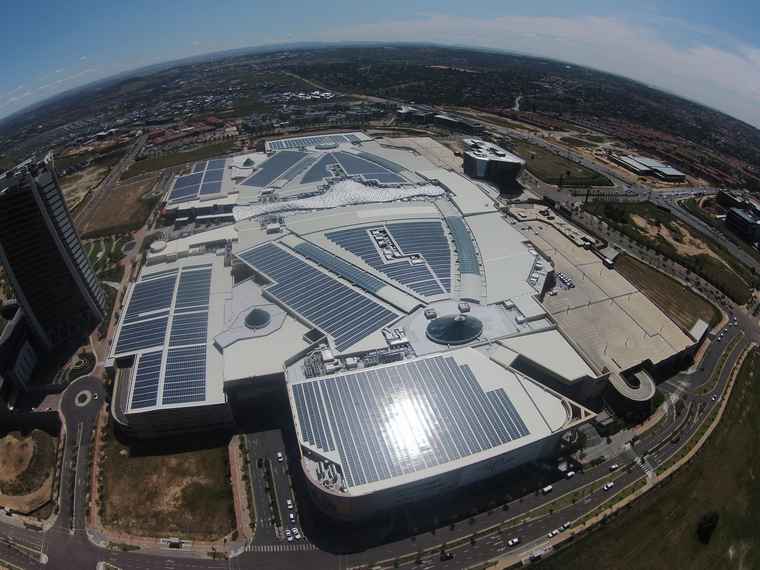 Mall of Africa is preparing to reveal a world first in integrated renewable energy systems. This record-breaking project is not only the largest rooftop Solar PV system of its kind in the Southern Hemisphere (and tenth worldwide), but as far as it can be established, the system is also the world’s largest integrated rooftop PV/Diesel hybrid solution.

The 4755kWp installation covers most of the available mall’s roof space, an area of approximately 45 000 square meters / 4.5ha. The energy generated will be used to power the mall’s daily operations.

“In the month that saw South Africa’s government launch an Integrated Resource Plan with a clear prioritisation of renewable energy as the path to our country’s energy security, we are thrilled to be announcing our own innovation in renewable energy generation.  Attacq is well known for its focus on sustainable building, especially in its flagship Waterfall development. This project will see the Mall produce sufficient power to support its day-to-day electricity requirements while also decreasing its overall Carbon footprint – another significant proof point in our sustainability journey.”

The resulting reduction in traditional electricity consumption will alleviate pressure on the National Power Grid, allowing for greater available capacity to support the substantial local economic growth currently experienced in the Waterfall area. In addition to ensuring that the mall reduces its carbon footprint, this project also created temporary employment for fifty people and full time jobs for two further workers.

Atterbury Property (who developed the Mall of Africa) played an integral role in the installation of the Solar PV system. Managing Director of Atterbury, James Ehlers stated that the company had long ago realised the importance of integrating solar-smart solutions into their building: “this Solar PV system is just one of many that we will be installing across our portfolio.”

“This is a ground-breaking project for South Africa’s solar PV industry and is estimated to be able to produce 7 800MWh annually. Solareff and Attacq successfully worked through the lengthy legal process, together with NERSA and Eskom, to ensure full legal compliance for this solution – the first of its size in South Africa” concludes Jaco Botha, Chief Executive Officer, Solareff.