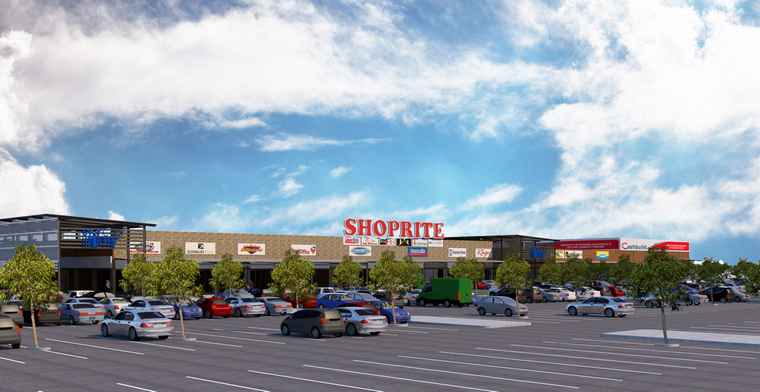 An artist's impression of the Sky City Mall.

The R10 billion retail and residential development, Sky City Precinct is currently underway. Starting life as a 12 000 square meter community centre by the 18th of April 2019, the development will host sixty shops, growing to a regional centre which will occupy more than nine hectares in the near future.

Positioned on a portion of agricultural land just south of Katlehong (known as Waterval), Sky City will form part of the Watervalspruit Township development which has been planned for the area. The mall will occupy an ideal location on the site at the intersection of the R550 provincial road – also known as Heidelberg Road – and a north south road. The R550 already draws high traffic volumes from the growing number of residential stands emerging in the area.

An exciting first for the Waterval residents, the mall is being developed by the GMI Property Group with Retail Network Services being responsible for the concept development of the mall.

Rossouw Architects have been appointed as designers of the mall while other members of the expert professional team include SM Maré Quantity Surveyors, DJJ Conradie Consulting Electrical Engineers and Proficient Engineering Civil and Structural Consultants.

The catchment area of Sky City Mall already comprises in excess of 143,000 people with close on 45,000 households. Over the next seven years it is envisaged that there will be an additional 37,000 households in the area as well as 16 schools. An affordable private school, part of the Royal Group, opened its doors within the Precinct in January of this year, and another school is planned to open in January 2019. The residential and schools component of the Sky City Precinct is being driven by Cosmopolitan Projects which plans to complete 13,242 residential stands, including 2,116 high-density apartments, over the next couple of years.

Population group demographics show an 89% Black and an 11% Coloured segmentation in the Sky City Mall catchment area, as well as a sizeable number of residents aged 20 to 34.

The phased community centre, has Shoprite confirmed as the anchor tenant. National retailers like Pep and Tekkie Town will head a strong line-up of fashion stores, both eat-in and eat-out food options will be catered for.