Not many people will argue that the first quarter of 2018 was an uncertain period with the announcement of Jacob Zuma’s resignation followed by corruption charges, the inauguration of the new president as well as the start of discussions for  government to proceed with land expropriation without compensation. Contrary to what may be expected, the impact of these tumultuous factors has not greatly negatively affected the country’s economic growth to date.

Lightstone has amalgamated findings from some of the major institutions, as well as analysis from their own data sets and does not expect any significant variations in the key economic indicators for 2018 when compared to 2017.

Paul-Roux de Kock, Analytics Director at Lightstone, says that forecasts show that GDP is expected to grow by between 0.7% and 1.5%. Interest rates are expected to change by -0.5 and one (1) percentage point and consumer price inflation should remain stable at between 4% and 5.5% towards the end of 2018.

At the end of 2017 national house price inflation stabilized at roughly 4% and according to De Kock experts are not expecting noteworthy deviations during 2018.  This range is also indicative of what can be expected for house prices in 2018.  In layman’s terms if the economy does not fluctuate, neither will the house prices.

As is the dynamic nature of inflation, it is warranted that a variation in the South African house price inflation forecasts for the mid, high and luxury values bands is expected. The same fluctuation can be expected for freehold properties.

Higher growth in the lower market segments have not always been the norm, with the luxury segment experiencing disproportionately higher growth from 2009 to 2016. One potential reason for the recent decline in the luxury segment inflation is due to owners scaling down, and this, combined with more buyers from the informal housing market entering the lower end affordable market, would drive the increase in the lower and mid value segments.

Differences in the house price inflation of sectional scheme and freehold properties are less pronounced, with the difference between the two segments conventionally being around 1% up or downward.

The house price growth for these two segments are expected to grow at:

The expected house price growth for the different classes of properties along with national inflation can be seen in the figure below: 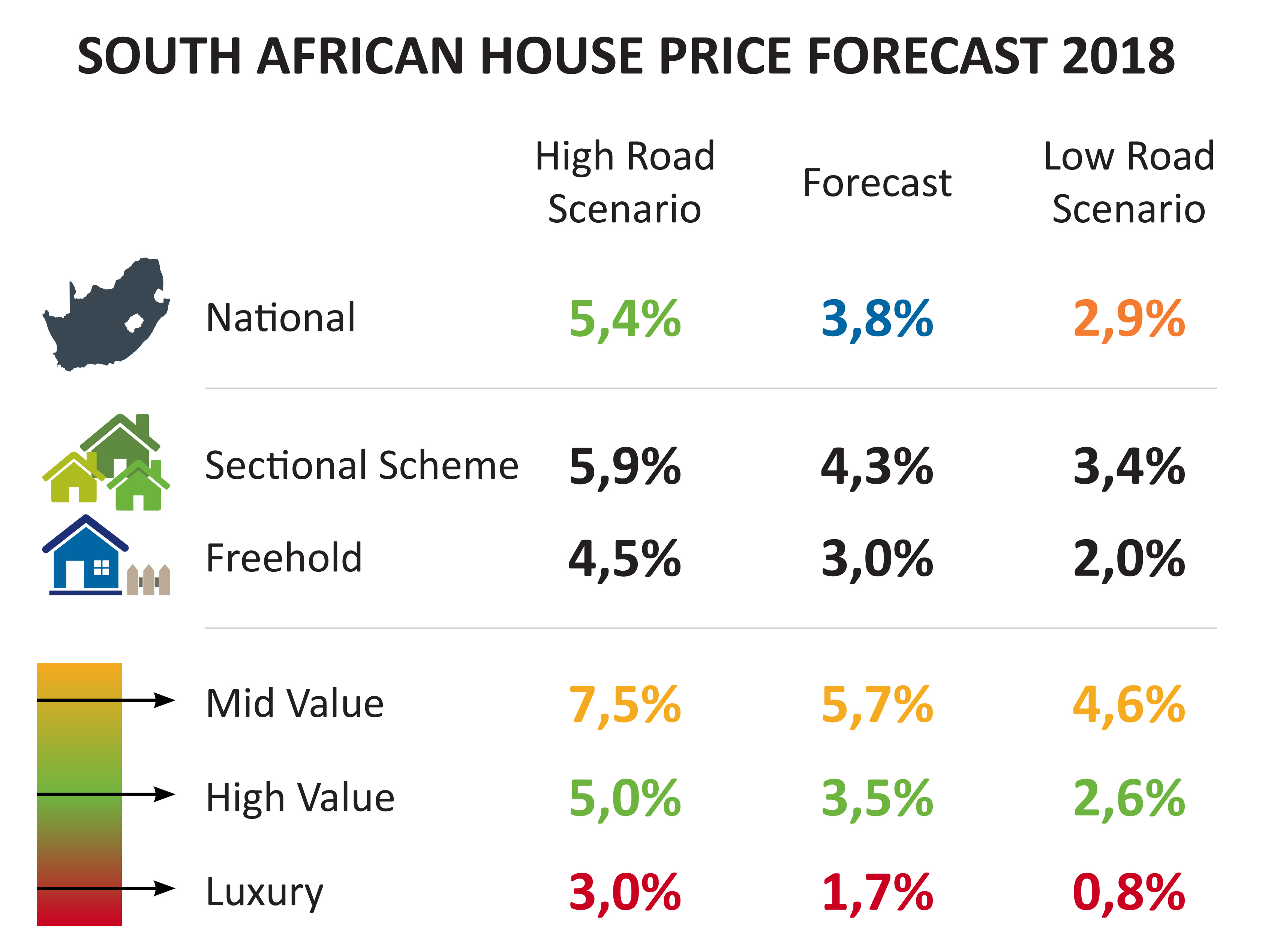 In 2017, the market was very much skewed towards a buyers’ market; this will start stabilising in 2018 with investors feeling more positive about South Africa. However, we might not see the full effect of a potential economic turnaround play positively into property price growth until the noise around land expropriation without compensation dissipates. Luxury property inflation will continue to decrease; however, the deviation will be more subtle and sectional title property will enjoy more growth as the popularity in this segment will endure into 2019.