The recent City of Johannesburg’s General Valuation Roll 2018 has caught many citizens unaware with high increases of between 40% – 70%. The municipality has further indicated that owners should submit objections to these valuation increases by 6 April 2018 should they find any irregularities.

Lightstone provides consumers with The Lightstone Valuation Report which is recognised as a credible source of automated property valuation. If the Lightstone value is less than the municipal valuation, the report can be used as evidence in an objection.

Hayley Ivins Downes, Head of Real Estate at Lightstone, explains that the municipality re-values up to 900 000 properties so it is understandable that some properties may not have the value that is an accurate reflection of the property:

“Property owners would be advised to go to the municipality’s website for information on how to convert the value of their property into a monthly rates and taxes amount. If the property value is not correct we would advise homeowners to consult a professional or download the Lightstone Valuation Report for their property.”

According to the Lightstone House price index, the total house price inflation in City of Johannesburg from June 2012 to June 2017 is 22.90%. There has been an average between 3% -6% each year over the last five years. This is an overall view of the city and analyzing each suburb would provide a clearer view of house price growth within that suburb.

When exploring several suburbs in the City of Johannesburg, it is evident that average property prices have increased over the period. 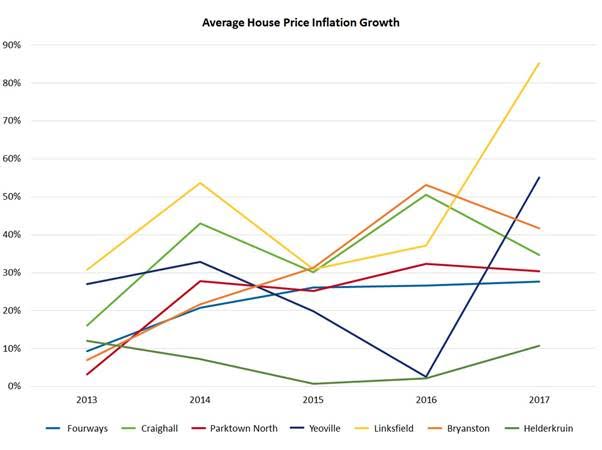 By simply signing up for a once-off report on the Lightstone website a Valuation Report can be sourced. The Lightstone AVM (Automated Valuation Model) uses recent sales activity to accurately understand how a market in an area is performing. By gaining an understanding of what other similar properties are selling for, the property owner, would have a clearer idea of what their own property could be valued at.

“During the previous round of valuations in 2013 there were cases of property inflation of over more than 100%. A property for example was valued at R 2.9 million, once an owner objected, it was lowered to R 2 million. After the appeal process the property value was eventually settled at R 1.7 million. This could have a very direct effect on the rates and taxes payable each year.”

Ivins Downes urges owners to investigate the latest valuation reports before the deadline and appeal these findings only if necessary.

The Lightstone AVM (has been developed in line with global best practice) and refined over several years for the specifics of the South African property market. As well as providing a market value prediction, Lightstone provides additional information to assist in decisions i.e.:

Both the model predictions and confidence scores (safety and accuracy) are back tested monthly and have been consistently improved using new statistical approaches and enhanced data supply. The AVM methodology and performance is tested periodically by both Fitch and Moody’s. The Lightstone AVM is the only AVM in South Africa approved by both agencies for mortgage securitisation and is used by most banks in South Africa during the mortgage process.