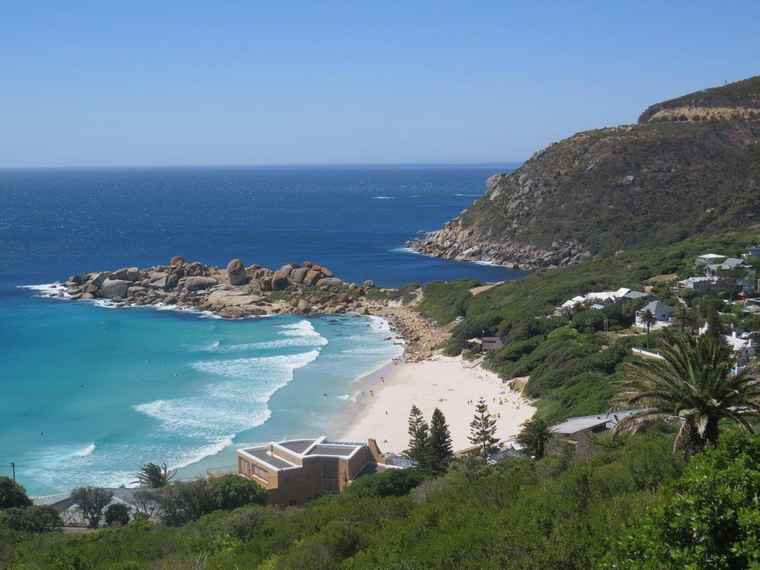 A view of Llandudno beach.

“Over the last ten years, the value of Llandudno residential property has continued to grow year by year at 6,5% per annum.  As a result, the current average selling price of homes is R16,5 million. This has been achieved despite a recent slowdown in sales over the last year and the countrywide economic recession which has made buyers less willing to move and upgrade.”

“The extraordinary thing about Llandudno,” says Margie Mackenzie, a founder and a Director of Cape Waterfront Estates “is that despite its house prices regularly outperforming all except a very few other Cape Town upmarket suburbs, e.g. Clifton, it remains relatively unknown and unappreciated.  We often find that upcountry people have never even heard of it.  In every way it merits the overused phrase, ‘a very well-kept secret’.”

Llandudno buyers often look at several other prestigious Cape Peninsula suburbs but eventually opt for Llandudno because of the many factors in its favor.

Topping the list of these factors is its setting and scenic beauty.

“It is encircled by mountains and has two pristine beaches.  As most of the homes are on steep terraced hillsides they have glorious panoramic views of the surrounding mountains and, to quote one of the older residents, ‘half the Atlantic Ocean’.  Being west and north facing almost all the homes bask in sunlight year round late into the evening.”

Four other crucial factors have enhanced Llandudno’s appeal and image of this very prestigious suburb. These are:

Prospective buyers would be interested to know that Llandudno offers:

“Like certain other high end Cape Town residential suburbs, Llandudno has shown year in, year out that it can plough its own furrow irrespective of economic fluctuations elsewhere in the country.  Today, more than ever, Llandudno has an exclusive upmarket ambience which makes those who live there grateful to be Llandudno residents and reluctant to leave.”

“Recent home sale prices in Llandudno”, added Mackenzie, “have ranged from R15,5 million to R70 million and as yet there is no sign of price rises slowing down.”