South Africans met the news of the downgrade to junk status with a justifiable amount of dread.

Matthew Murray of Spire Property Management explains that, as indicated in the graph below (which depicts the credit ratings history of South Africa since 1994 according to presidential reign), this is not the first time South Africa has been graded as “junk status”. 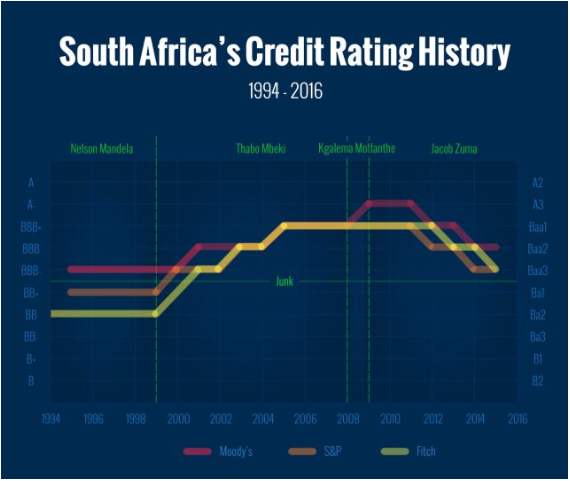 “South Africa was able to recover from Junk Status previously as the previous economic cycle (period 2004 – 2007) saw a strong recovery in capital investment. This was achieved through prudent fiscal policy and a lot of hard work spearheaded by the then Minister of Finance, Trevor Manuel which resulted in solid GDP growth. However, the current GDP growth forecast suggests a more moderate increase, at best! In fact, according to Stats SA GDP in the first quarter of 2017 contracted by 0,7%.”

So what will our current junk status mean for the commercial property rentals sector?

“As at Q1 2017, the National Office Vacancy rate as recorded by SAPOA was 11.1% – the highest level seen in 12 years. This vacancy rate has been driven largely by a low growth environment combined with an excess supply in the market,” explains Murray.

“A sustained improvement in the office vacancy rate during this current economic cycle relies on a strengthening of macroeconomic drivers such as Real GDP Growth, Job Growth and Business Confidence. These fundamentals underlying the Office Sector recovery remain fragile. Business and Financial services capital investment, a key indicator for office occupancy, similarly remains negative at -1.6% year on year (SAPOA, 2017).”

Murray cautions that the impact of junk status is that it could deter this much needed capital investment. This raises the probability that office vacancy rates could deteriorate further before improving. This would then result in a more prolonged, uneven office vacancy recovery relative to the 2004 -2008 cycle (SAPOA, 2017).

What opportunities, if any, are available in the face of what may seem to be doom and gloom?

“In overly pessimistic times there are often areas for opportunities,” says Murray.

“This is evident in the fact that 23 out of 53 nodes reported improving occupancy rates during the first quarter of 2017 and 22 nodes currently have vacancy rates of sub 8% (SAPOA, 2017). Therefore, leasing opportunities still do exist. This underlies the importance of nodal selection for property fund and asset managers in the current market. The old saying holds true ‘location, location, location’.”