Shareholders are advised that the company’s integrated annual report, incorporating the audited annual financial statements for the financial year ended 31 August 2016, was dispatched to shareholders today, Tuesday, 28 February 2017 and contains the following changes to the information contained in the provisional reviewed condensed consolidated results for the year ended 31 August 2016, which were announced on SENS on 7 November 2016: 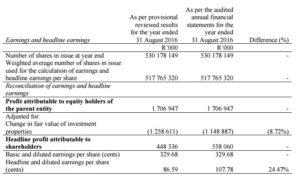 The difference is due to the headline earnings reconciliation not taking into account the non-controlling interest adjustment for the change in fair value of investment properties in the provisional reviewed results for the year ended 31 August 2016.

The integrated annual report contains a notice of annual general meeting for Rebosis shareholders, which will be held the offices of the company at 3rd Floor, Palazzo Towers West, Montecasino Boulevard, Fourways on Wednesday, 19 April 2017, at 10h00.

The last day to trade in order to be eligible to participate in and vote at the annual general meeting is Tuesday, 4 April 2017 and the record date for voting purposes is Friday, 7 April 2017.