Nairobi has ranked 10th in JLL’s fourth annual City Momentum Index (CMI) of the world’s most dynamic cities. It is the only metropolitan in Africa to be listed in the Global Top 30 of the world’s fastest-changing cities. 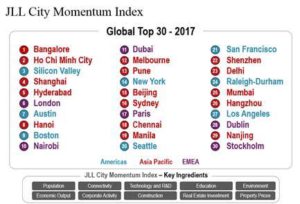 A common denominator across the ranked cities is the ability to embrace technological change, absorb rapid population growth and strengthen global connectivity. Cities in India, China and Vietnam, along with several in the U.S., head the list of the world’s fastest changing cities.

“With more than half the world’s population currently living in cities, a proportion that is expected to grow substantially over the next few decades, the success of our cities takes on great importance,” noted Jeremy Kelly, JLL Director in Global Research. “The CMI highlights that, despite various political upheavals and ongoing economic uncertainties, many cities continue to show impressive dynamism. Keys to their success are the agility and openness that enable them to adapt quickly to each new wave of global change.”

Ewout Holst, JLL’s head of Corporate Solutions, Sub-Saharan Africa, comments, “Technology is a significant driver of momentum in the world’s 30 fastest-changing cities, and it is the key reason for Nairobi’s shift up the ranking in 2017 into the Top 10. The city is proving a fertile environment for innovation which is fuelling a development boom across all sectors”.

Holst says the Kenyan capital has recently emerged as a regional technological hub. “It is home to iHub, Africa’s most successful tech incubator, and is a leader in mobile payment technologies, typified by MPesa. The escalation in tech development is boosting the city’s attractiveness as a preferred destination for regional headquarters on the continent.”

This innovation drive, together with low costs, rapid consumer market expansion and high levels of foreign direct investment is characterising Nairobi as a ‘High Potential City’, a platform shared with HoChi Minh City (2) and Hanoi (8) in Vietnam on the CMI.

Nairobi does have challenges that cannot be overlooked. Holst refers to the urban slums and lack of high quality infrastructure. “Despite the challenges, the city has a strong urban vision which seeks to address the infrastructure deficit and continue to promote the development of the technology sector. It’s a vision that is cementing the city’s reputation as the gateway to East Africa for many firms seeking a base on the continent.”