“Bearing in mind that we are excluding the ‘affordable housing sector’, namely homes priced below R250 000, it is interesting that a recent SARS data release allows for the comparison of affordability in various provinces and major metros. Coupled with this, rising congestion – in regard to population and density in general – in major centres is prompting some analysts to argue for a new, more complete, measure of housing affordability,” he says.

“Typically, the affordability of housing is measured by the ratio of house prices to average household income. House prices have a tendency to become overvalued, resulting in housing ‘bubbles’. A measure which allows potential homeowners and policymakers to monitor whether the housing market is becoming overheated is thus crucial. Using the long-term average ratio of house prices to household income as the benchmark, it is possible to determine whether the current ratio of house prices to income is above (over-priced) or below (under-priced) the historical average. Using this methodology, the housing bubble of 2007 is clearly visible (see Figure 1) and should have served as a warning to potential buyers and policymakers alike. 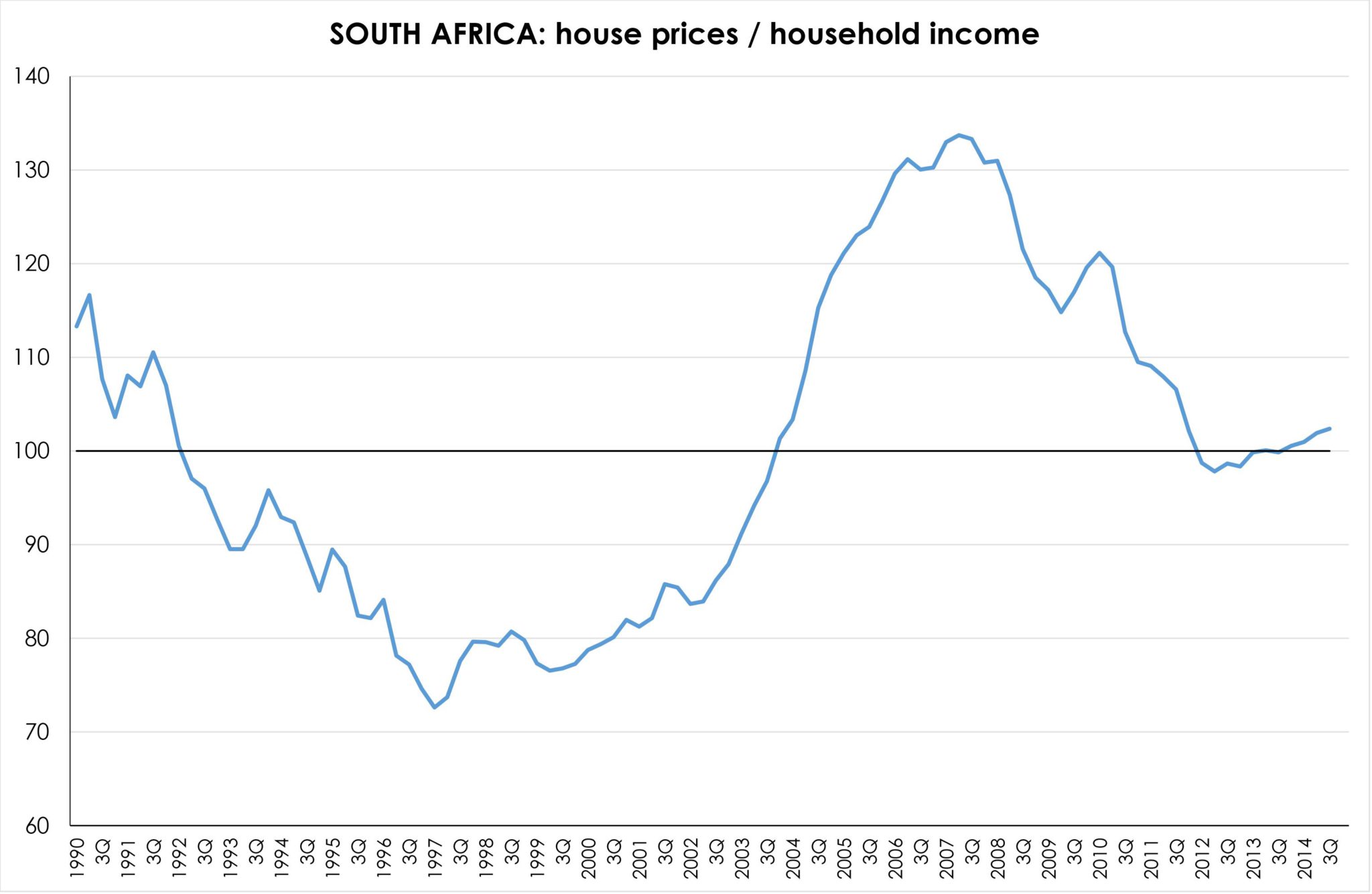 “The most recent affordability figures show a gradual deterioration in the affordability of local housing. Since the beginning of 2013, growth in house prices has outstripped growth in household disposable income by a margin of around 2%, causing housing to become gradually less affordable. Taking a longer-term perspective, however, the current ratio remains close to the historical average and is thus unlikely to be of concern to policymakers or potential buyers.”

Dr Golding says when compared to other global property markets, South African house prices remain affordable while those of Australia, in particular, and Britain, remain extremely expensive compared to household disposable income. The affordability ratio in Australia remains close to the record levels recorded in late-2003 and early-2010, suggesting that a housing bubble remains. In Britain, the affordability ratio declined quite sharply during the 2008 global financial crisis but is now rising rapidly once more. 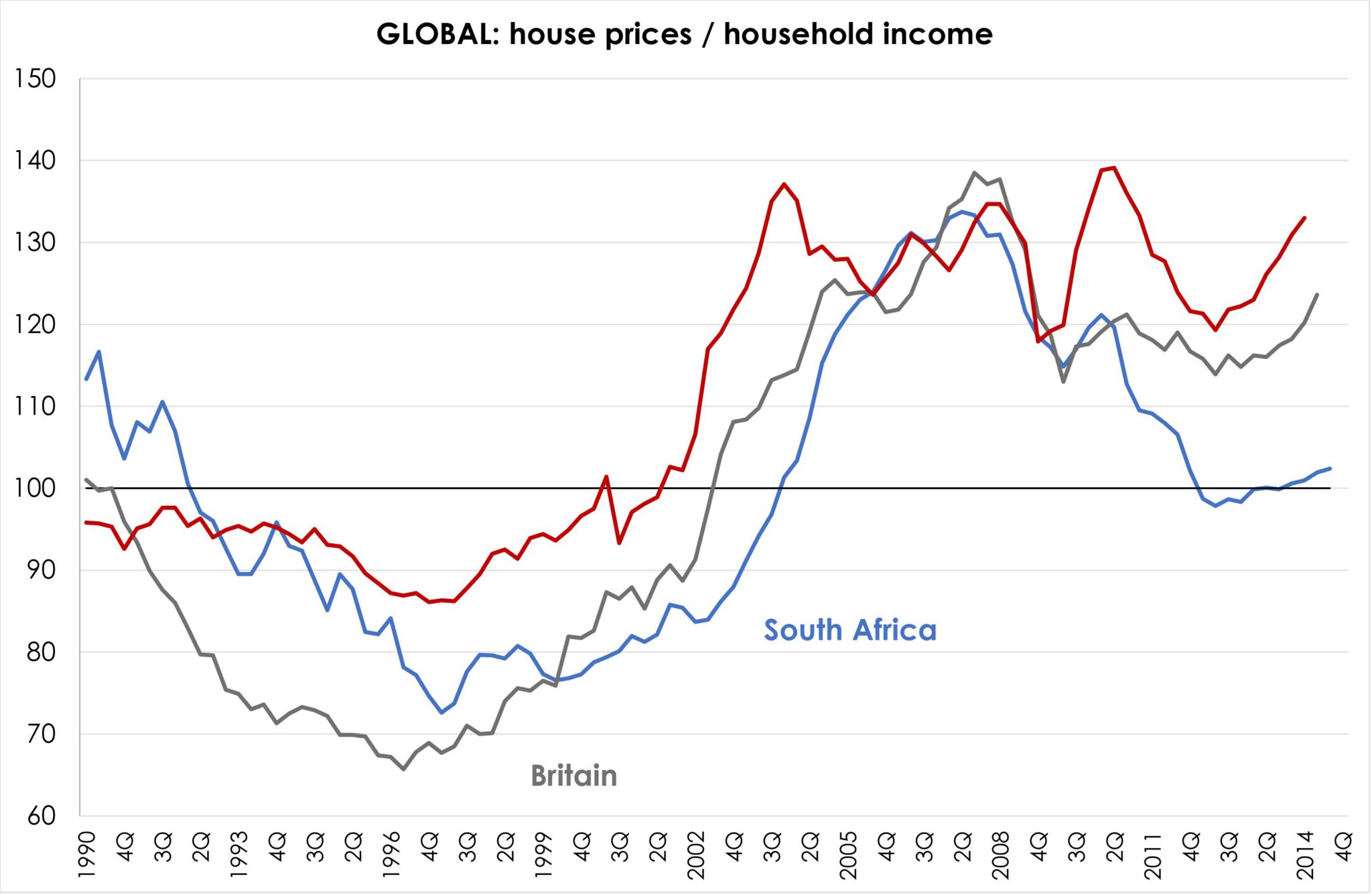 He says, however, as with house prices in general, the national average disguises a wide range of divergent trends in different regions, cities and suburbs. Countries like China – a country in which many believe that house prices have soared well beyond the reach of ordinary people, where the Economist Intelligence Unit has created a city-level index to track the relationship between housing prices and incomes. While China’s biggest cities such as Beijing and Shanghai are on average 14 times higher than annual household incomes, for smaller cities the ratio is eight. Overall, housing in China has become more affordable over the past four years and many smaller cities are in fact suffering from an over-supply of housing.

Major provinces at the extremes

A recent release of data by the Treasury and SARS provides the average taxable income in 2013 for taxpayers in provinces and metros across South Africa – data that is not easily available for household disposable income. Using taxable income rather than disposable income generates a different result from the more traditional ratio, since this measure excludes all non-registered taxpayers. While this ratio is not directly comparable to the global measure as used by The Economist, it does allow for comparisons to be made within South Africa between various provinces and metros.

Says Dr Golding: “Working with 2013 taxable income and average house prices for each province (using Absa house prices), it is clear that the two major provinces – Gauteng and Western Cape – are at the extremes of the range of affordability in South Africa, with house prices in the Western Cape the least affordable and Gauteng the most affordable. The relative affordability of housing in Gauteng can be attributed to the fact that Gauteng recorded the highest average taxable income in South Africa in 2013, while average provincial house price inflation in that province has lagged that of the Western Cape and, more recently, KwaZulu-Natal as well.

“Furthermore, Gauteng accounts for a growing share of new housing units coming onto the market, with the provincial share of the total build rising from 48% in 2007 to over 55% in 2014 (to end-August 2014). This is helping to ease the chronic stock shortage which continues to drive prices higher in the Western Cape and KwaZulu-Natal.”

The 2013 tax statistics also provide details of taxable income for various municipalities and metros across the country. The list of the top 10 municipalities offers some unexpected concentrations of wealthy households with Gamagara (Sishen) for example, boasting the second highest average taxable income in 2013 (see table below).

Johannesburg is the country’s most densely populated metro, with 4.4 million inhabitants. In 2013, it had over 660 000 taxpayers who earned the highest average taxable income in South Africa. Johannesburg is home to most of South Africa’s wealthy individuals – with nearly 10 900 households in the top income bracket (R2.5 million or more a year). While this accounts for 23% of the country’s wealthiest households, the wealthy comprise less than 1% of the total number of households in the metro. While average taxable income for the metro is R318 533, the average annual household income for the metro is just R29 400.

Tshwane is the third-largest municipality, with 2.9 million people. It is home to numerous government departments and has the second-highest number of embassies in the world – after Washington DC. This undoubtedly helps explain why the metro is home to 5 891 households in the wealthiest income bracket – the second highest number after Johannesburg. 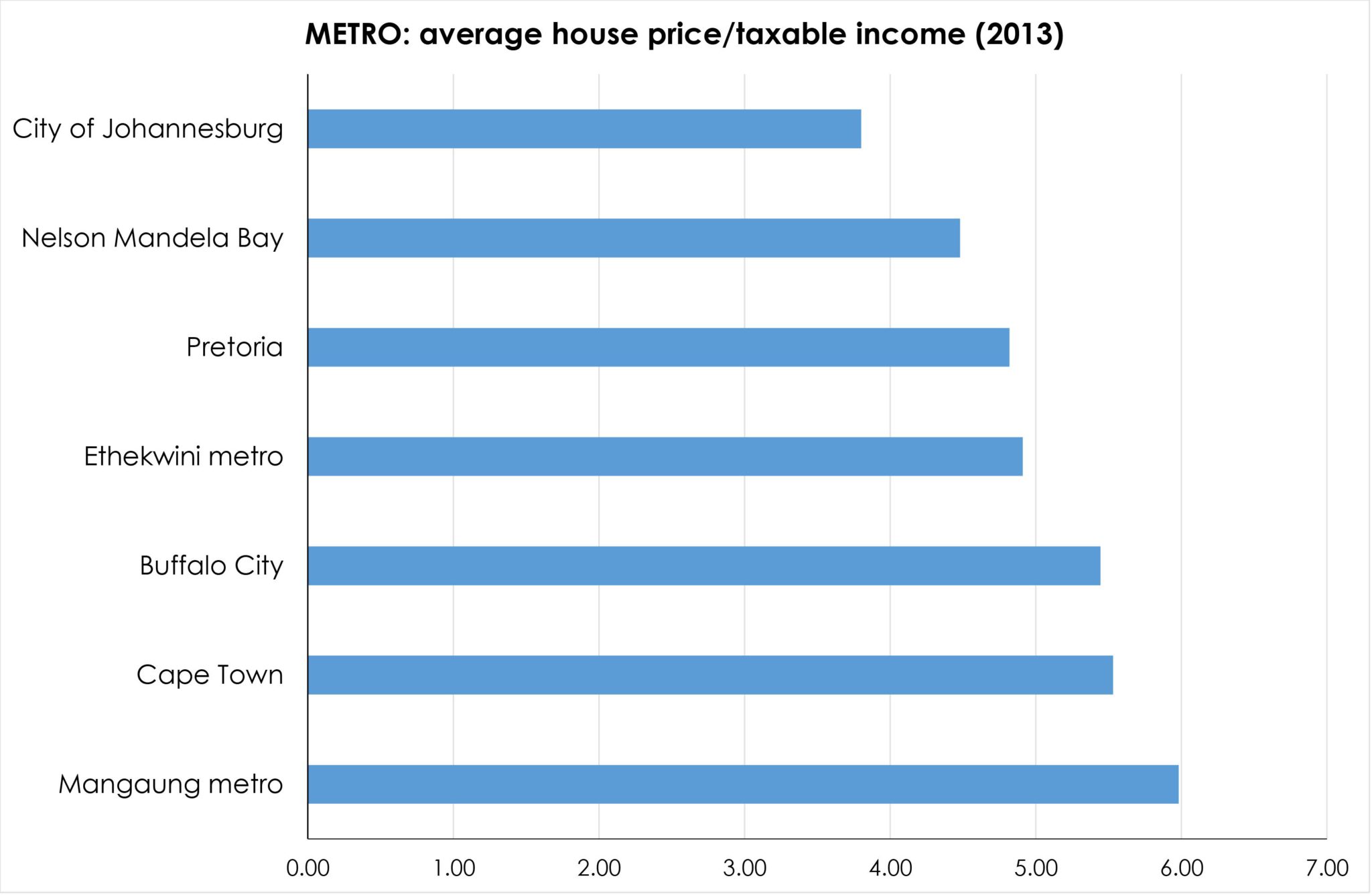 A new measure of affordability?

Says Dr Golding: “It is often said that a potential homeowner should not spend more than 30% of his or her income on housing costs. However, there is a growing school of thought in America which suggests that this measure of affordability is incomplete, as it excludes any consideration of the second largest expense facing most households, namely transportation.”

The American non-profit Centre for Neighbourhood Technology (CNT) suggests that potential homeowners consider housing and transportation costs in tandem since these costs are often inversely related to each other, depending on the location of a house. This then obscures the true affordability of a house. CNT argues that the most important affordability threshold is not the traditional 30% for housing but rather a 45% cut-off when the two costs are added together.

CNT argues that a home that is located relatively close proximity to work, school and retail outlets is going to allow for more efficient travel. Conversely, places that are not as efficient entail far longer and more expensive commutes, making the cost of living far higher than anticipated. CNT is attempting to promote the idea of ‘location efficiency’. CNT hopes this more comprehensive affordability measure will allow potential homeowners to consider the hidden transportation costs of a house which would make that property less affordable, or allow for a mortgage of more than 30% of income for a location efficient purchase.

“South African households spend a similar portion of their income on housing and transportation,” says Dr Golding. The basket of goods and services included in the Consumer Price Index (CPI) is based on the spending patterns of South African consumers. The category ‘housing and utilities’ accounts for a hefty 24.5% of average consumer spending, while ‘transport’ follows as the second largest category at 16.4%.

He concludes: “As congestion becomes more severe in several metros and suburbs across South Africa, there are signs that homeowners are opting to relocate to less crowded areas. Perhaps in time the concept of location efficiency will become more mainstream among local homebuyers and financial institutions.”