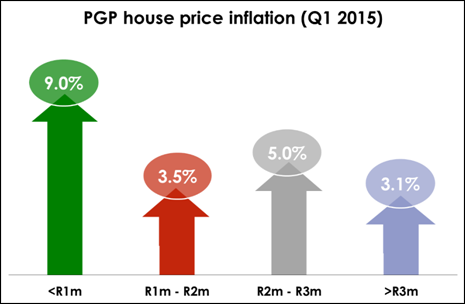 “Despite an unexpectedly weak start to 2015 for the South African economy – largely due to the impact of nationwide load-shedding – the performance of the local residential property market continues to compare favourably relative to other global markets.

“Furthermore, the loss of momentum in local house price inflation has been limited. Prevailing low interest rates, a modest improvement in household disposable income and a marginal strengthening in the overall economy suggests average house price inflation of high single digits this year. With inflation forecast to average just five percent in 2015, it is anticipated this will allow for a real increase in house prices,” says Dr Golding.

According to the Pam Golding Residential House Price Index national house price inflation peaked at 6.7 percent in the third quarter of 2014 and has since eased to an average of 6.3 percent in the first quarter of 2015.
“The price performance in the lower price band, which has been the strongest performer of late, appears to be losing momentum,” he says. “The pace at which prices are increasing is clearly slowing and it appears that buyers in this price band may be starting to feel the impact of the recent deterioration in economic conditions.

“However, it is useful to compare local house price inflation to the price performance in other global property markets as this reveals that South Africa remains one of the better performing housing markets internationally.”

According to the Global Property Guide, South Africa was the 10th top ranking global property market in the final quarter of 2014, with nominal housing inflation of 8.1 percent. However in real terms, South Africa is only 22nd with a real (inflation-adjusted) increase in prices of 2.6 percent during this period. Although relatively low when compared to other global markets, which reflects South Africa’s relatively high inflation rate, it is a marked improvement on the final quarter of 2013 when local real house prices fell by 1.3 percent.

There is a growing divergence in performance between the various global property markets, with about half these housing markets recording stronger upward momentum in prices, while the balance showed weaker momentum or in some cases, outright decline last year (2014).

The PGP Index reveals that the underlying trends previously identified within the various price bands remain largely unchanged, with the lower price band under R1 million recording the strongest growth at 9.1 percent in March 2015 from earlier levels, while the upper price band over R3 million continues to lag, with an increase of 2.3 percent in March.

Says Dr Golding: “However, these trends are losing momentum which suggests they may be approaching a turning point. This includes factors which point to a potential recovery in the performance of the upper price band, with PGP’s Gauteng region reporting increased activity in the upper price band in recent months. In the Western Cape, PGP notes a growing trend towards ‘upscale downsizing’ with home owners increasingly favouring smaller homes in a similar or higher price band, with lower overheads and improved security. This is coupled with renewed interest among ultra-high net worth individuals (UHNWI’s) in tangible assets – such as property, with the recent Wealth Report highlighting Cape Town and Johannesburg as being among the best-performing global housing markets in 2014.”

He says in the lower price band, it appears that buyers may be starting to feel the impact of the recent deterioration in the economy. With less financial wiggle room than higher income brackets these households are typically more sensitive to changes in the economic environment, which may also mean that this segment is often quick to recover when economic conditions improve.

Looking at the three major regions, Gauteng, Western Cape and KwaZulu-Natal, house prices in KZN have outperformed in recent months, attributable to factors including the lifestyle offering and value proposition, the spatial distribution of economic nodes which serves to lessen congestion and the severe stock shortage experienced.

In Gauteng, property developers have returned after a long absence in the wake of the 2007 global financial crisis, resulting in a healthy recovery in the number of new units being sold in this province during 2012 and 2013. This was accompanied by a loss of momentum in price increases, partially attributable to the easing in stock shortage.

Confirming the national trend towards downsizing to more manageable homes, the number of flats and townhouses built jumped by just over 30 percent from a year ago.