Lightstone, a provider of comprehensive data, analytics and systems on automotive, property and business assets, conducted a nationwide residential property market analysis for each quarter over 2012 and 2013 with focus on transfer volume and transfer value data. 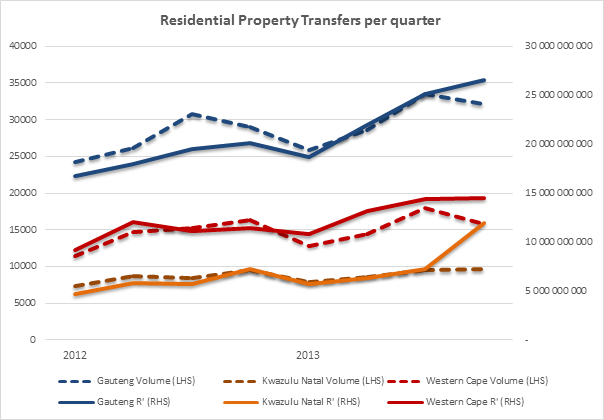 “On closer inspection, the statistics for Gauteng revealed that whilst values traded had, on average, increased by around 24%, actual sales volumes only increased by around 9%. This can be an indication that the demand for housing has started to outstrip supply in certain areas,” explains De Kock.

In the Western Cape, the value of properties traded increased by 21% from 2012 to 2013, but the actual sales volumes only increased by 6%.

De Kock says although you’d expect estate agents to see their sales commission’s increase as the values traded increased, this lower stock supply also leads to increased competition in the market and a slashing of commission percentages, in an attempt to obtain, and retain their deals.

“Growth in KwaZulu Natal, which is usually a dominant market player, was not as spectacular as the other major provinces in the first 3 quarters of 2013, which could be due to a drop in the KwaZulu Natal tourism market. We did however notice a spike in value transferring in the last quarter of 2013 which can signal good news for the KZN property market”.

“In Limpopo, quarter by quarter for 2012 and 2013, value traded increased, however volume stabilised which could indicate a renewed interest in the higher valued leisure housing market. The North West saw a spike in both the number and value of residential properties registered in the second and third quarter of 2013.”

“When deciding whether to invest in a property for business or property in general, it’s important to understand the hidden market factors at play before setting sales aspirations and signing on the dotted line. For investors who are looking to purchase residential property, make sure you look at the growth in the housing market of the specific area you are looking to buy in, not just by looking at the volumes traded, but also by looking at the relative availability of residential stock that will be available in the future” concludes De Kock.