The fast growing, R250 million, 179-unit “The Beaumont” apartment complex, developed by Rawson Developers on the southern side of the Claremont CBD (just one block away from Cavendish Square), will, says the project manager, Dale Nortje, be the most luxuriously fitted out multi-unit development that Rawson Developers have ever handled. Underfloor heating as well as heated towel rails will be standard in the bathrooms and Rustenburg granite will be used for all the kitchen counter tops. Cupboards throughout will be Duco sprayed and the sections of floor which are tiled (generally the communal sections) will have Thar Gris 600 mm2 porcelain tiles – a very attractive feature. Security will be enhanced by fingerprint recognition, cameras and by round the clock guards in the upmarket foyer. 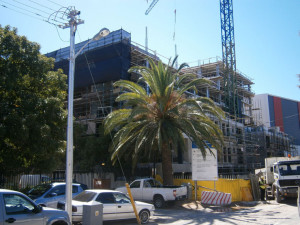 A current construction image of “The Beaumont” in Claremont.

“From the very start”, said Nortje, “we were a little concerned that the plaster treatment of the façade might not live up to the high standard of the exterior finishes. Anyone who knows contracting will understand that the appearance of hand applied plaster over a very large area can vary from one section to another – which is unsightly. However, we believe we will now achieve complete consistency and overcome the problem because we have specified a 1,5 mm thick Marmoran Permaplast coating. This will be applied by Marmoran’s own trained applicators and we expect the façade to have a very pristine look.”

Work on this will start within the next six months and will probably take three months. Altogether 6,000 m2 will be treated this way.

Permaplast, said Nortje, comes with a ten year guarantee and is expected to last far longer. The product, he says, has superior waterproofing properties and among its other virtues is its molecular structure, which enables it to exude moisture outwards while preventing moisture ingress.

The Beaumont’s façade, added Nortje, will be in two colours – the narrow, strong vertical bands in which the windows are placed will be dark grey and the remainder of the building will be in a natural white, which will be less overpowering by being one or two shades off a pure white tone.

Rawson Developers’ construction team are three weeks ahead of schedule at “The Beaumont”. The official completion is now scheduled for early next year. However, the developers will try to begin handovers of certain units in mid-December.

The five-storey block in the complex topped out in November last year and the twelve-storey block, which is rising at one level every two weeks, and is currently on the eighth level, will top-out in June.

Altogether 154 of the 179 units have now been signed for and have had deposits paid up for them. Nortje expects the remaining 25 to be sold by the end of this year. Standard units vary in size from 32 m2 to 94m2 and most have balconies. The units have one or two bedrooms with the small bachelor units combining the living, bedroom and kitchen space into one open-plan unit.

On the top floor of the taller block will be five luxury penthouses, varying in size from 50 m2 to 249 m2. These have sold for prices up to R4,4 million. The standard units are currently priced from R1,0 million to R2,6 million.

Nortje said that the most challenging part of the construction task has been the double level parking basement, which will take over 190 cars. To provide support for the walls until the horizontal slabs were cast, Rawson Developers had to leave large quantities of the thick, water-saturated subterranean clay in place until the slab had set. All basement work will be finished within a month and, added Nortje, has been made more difficult by the heavy inflows of water (Newlands and Claremont are notoriously wet suburbs in winter) and round-the-clock pumping has had to be on-going.