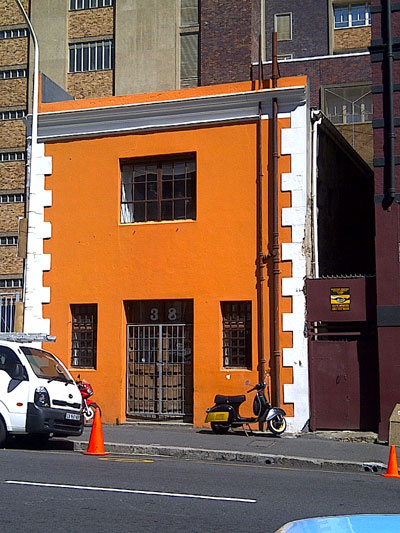 This historical 120m2 property at 38 Buitenkant Street, Cape Town was sold on auction for R2.6 million

Under the leadership of award-winning property professional, Kim Faclier, Managing Director, Property for GoIndustry DoveBid South Africa, the company implemented a series of exciting and record breaking auctions. “With over R120 million rands worth of properties sold at the fall of the hammer this past week, the auction industry has turned a new corner and proved that properties can be sold and confirmed in a transparent and authentic manner, providing the authenticity and corporate governance required” commented Faclier.

GoIndustry DoveBid’s experienced personnel, auctioneer, national footprint and proprietary cutting-edge IT platform provided the successful mechanisms for all the real estate auctions for parastatal Telkom. A huge amount of planning, preparation, media placements, marketing, advertising, print as well as online via our global IT platform went into ensuring that this project was an unprecedented success,” says Faclier.

All the properties on offer in Cape Town, Johannesburg and Bloemfontein last week were sold on the fall of the hammer – a first for an auction house on behalf of a parastatal.

The sale mandate included vacant land and residential buildings, as well as some high value commercial and industrial properties. Altogether more than 50 properties went under the gavel. The properties are situated all over South Africa, from the Western Cape to KwaZulu-Natal, Gauteng, North West and Mpumalanga – and many places in between.

“The Gauteng auction had the most properties with the highest values. Frenetic bidding took place in a packed banqueting hall at Protea’s Fire & Ice Hotel in Melrose Arch. A vacant 9 999m2 stand in Benmore Gardens, Sandton was sold for a whopping R38.5m; a 28 000m2 property in Joubert Park in the Johannesburg CBD with 5 levels of parking was sold for R21.5m; and a sought-after property in Mayfair sold for over R7m.

“At the Cape Town auction, held at the African Pride’s 15 Orange Hotel, properties sold included a building on the corner of Lower Church Street and Morom Road in Wynberg which went for R3.5m; and a building on a 120m2 erf at 38 Buitekant Street in the CBD, which was knocked down for R2.6m.

In Bloemfontein the “Old Match Box” factory on the corner of Vooruitsig and Church streets in Hamilton was sold on site for R8,3m.

“Go-Dove’s Lead Auctioneer Joey Burke, was “on fire” at all the live auctions around the country. His mercurial auctioneering skills creating a bidding frenzy amongst the buyers with over R112 million rands worth of property being sold and confirmed on the fall of the hammer”, said Faclier.

In addition to live auctions, the on-line auctions, held in December 2013 and March 2014, Go-Dove proved successful with the smaller valued properties dispersed around South Africa, and sold these via Go-Dove’s own proprietary online auction platform. The on-line activity far surpassed all expectations too. Over 24 000 page views took place on our website, with more than 2145 bids placed over a 24 hour period. The Go-Dove back-end system allows full tracking capabilities of the entire bidding history from registration right through to the end of the sale” said Faclier.

“All in all a 97% success rate was obtained and achieved, together for the live and on-line auctions”, commented Donovan Dalton, Head of Valuations for Go-Dove.

Go-Dove is a leading provider of asset management and real estate services with 40 offices in 27 countries. Most of its clients are Fortune 500 & Fortune 1000 companies. The company, BEE Level 1, launched its first dedicated property auction division in 2011 with Faclier at the helm.