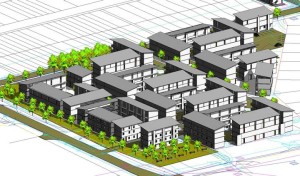 Aerial perspective of the envisioned Langa-units and basic plan layout

Council has approved the budget for seven human settlements projects, as already identified in the City’s Integrated Development Plan. The approval forms part of the necessary compliance requirements to include the projects in the City’s Medium-Term Expenditure Framework for the 2014/2015 to 2016/2017 financial years.

‘Our commitment to redress through the increased delivery of housing opportunities is a key pillar of this government. Although we are faced with an extremely high rate of urbanisation in Cape Town, we will not give up in our endeavours to create a caring and opportunity city by providing housing opportunities,’ said the City’s Mayoral Committee Member for Human Settlements, Councillor Tandeka Gqada.

The majority of the projects are scheduled to commence in the 2014/2015 financial year. Projects include new housing developments, the continued transformation of the apartheid-era style hostels in Langa, and ongoing upgrades to the living conditions of backyard dwellers and residents in informal settlements – subject to the availability of funds.

The approved allocation includes three housing projects, in Macassar (in the Helderberg area), Fisantekraal (in the Durbanville area) and Imizamo Yethu (in the Hout Bay area).

The Macassar Housing Project Phase 1, to be created, is envisaged to cost approximately R62,5 million (excluding funds from the National Treasury’s Urban Settlements Development Grant). It is expected that 1 700 units will be built in Phases 1 and 2 of this project.

The Fisantekraal Garden Cities Phase 2 Housing Project has an estimated total cost of approximately R87,9 million (excluding funds from the National Treasury’s Urban Settlements Development Grant). This project will be developed on land held by the non-profit organisation Garden Cities. The City will allocate funds for the development of subsidy housing and for the provision of associated infrastructure and facilities.

Council has also approved funds for the further upgrading of hostels as part of the City’s Hostel Transformation Programme. Approximately R320 million has been earmarked for the Phase 2 development of the Langa Hostels Community Rental Unit Project (excluding funds from the National Treasury’s Urban Settlements Development Grant and the Human Settlements Development Grant). Phase 1 of this project is due to commence soon, with the construction of 463 rental apartments. This project will positively affect the lives of thousands in this impoverished area of Cape Town.

It is envisioned that 1 300 families (or approximately 5 200 people) will ultimately be relocated from apartheid-era hostels to secure two-bedroomed apartments in Langa – with individual kitchenettes, toilets, showers and solar-heated water systems, washing lines and space for children to play safely in the grounds.

The City’s overall Hostel Transformation Programme consists of an estimated 15 000 units that will eventually be built in Langa, Gugulethu and Nyanga.

Projects estimated at more than R600 million have been approved for the upgrade of the living conditions of backyard dwellers and residents in informal settlement areas.

In terms of Section 19 of the Municipal Finance Management Act, 56 of 2003, and Regulation 13 of the Municipal Budget and Reporting Regulation, municipalities must obtain Council approval for capital projects where the total cost of the project is R50 million or greater.

The majority of the projects are scheduled to commence in the 2014/15 financial year.