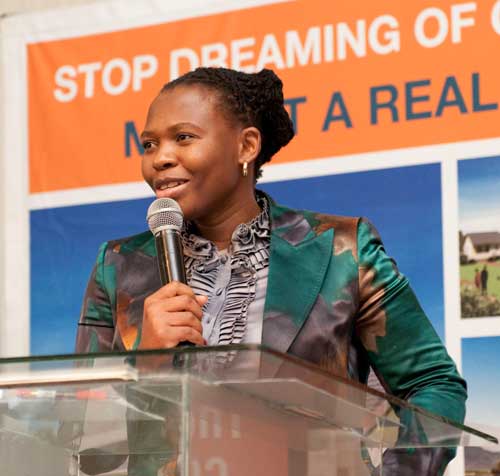 27 title deeds were handed over to residents as part of the Philippi East Phase 5 Housing Project.

This historic project is nearing completion. To date 436 units have been built. All of the units have running water and most of the dwellings have electricity. Eskom is still undertaking the electrification of the additional 31 units.

This Phase 5 project is part of the Greater Philippi East Project that has been in development since 1994 as part of the then presidential Integrated Serviced Land Project.

It entails the development of high density housing on approximately seven hectares of land previously reserved on both sides of the railway line.

The development is well located on both sides of the Mitchells Plain and Khayelitsha railway line, abutting the Stock Road Station. The area’s bulk services were installed in the 1998/9 financial year as part of the Greater Philippi East Development.

‘To date, 126 transfers of title deeds have been registered. The remaining 310 titles deeds that haven’t been lodged yet are a top priority at the moment. It is anticipated that the lodgement and subsequent registration of the remaining beneficiaries will take place at the beginning of next year.

I am overjoyed that we can show our commitment to redress in this manner and that after many years, we can reach this milestone,’ said the City’s Mayoral Committee Member for Human Settlements, Councillor Tandeka Gqada.

During the development of the Greater Philippi East Development some potential beneficiaries could not be accommodated. In June 2004, City of Cape Town appointed a consultant team to undertake all the required feasibility studies, environmental and planning processes in order to utilise the Philippi East Phase 5 for housing.

In May 2005 the land owned by the National Department of Public Works was transferred to the City of Cape Town. Thereafter, the Provincial Housing Board granted final approval for the planning application.

In October 2009, a contractor was appointed to construct 405 top structures. Adjacent municipal land was secured and the contract was extended for another 31 housing opportunities, thus totalling 436 units.

Every unit is 40 square meters in size, including two bedrooms, one bathroom, a kitchen and a geyser as an additional feature.