The Liberty Group announced today significant plans to further entrench its Liberty Midlands Mall investment as the lifestyle centre of choice for tenants and shoppers in the Pietermaritzburg area. The R380million investment will see the development of a new lifestyle centre, including retail and office components, adjacent to the existing mall. Not only will the expansion strengthen the centre’s positioning in the area, but the improved retail offering will boost the mall’s ability to differentiate itself. Upon completion, the extension will increase the entire complex floor space by an additional 19,000m² to a total GLA of over 75,000m². 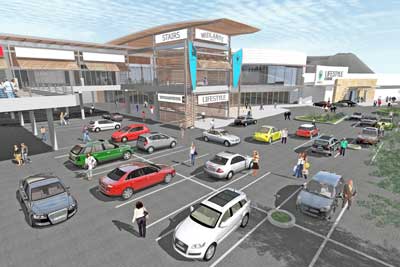 Lifestyle centre will include retail and office components, adjacent to the existing Liberty Midlands Mall

Liberty Properties has been awarded the mandate to develop the undertaking on behalf of the property owners. Commenting on the project, Graham Kusano, Divisional Director: Property Development at Liberty Properties says, ‘The exciting new lifestyle extension is attracting new brands and specialist stores not currently available in the area as well as giving existing retailers the potential to expand’. The project will also strengthen the existing centre’s mixed use offering by introducing an office component through the addition of a two-storey office block. Kusano says the new lifestyle centre will be at least 80% pre-let prior to development commencing.

This is the third phase of Liberty’s vision for Liberty Midlands Mall. ‘From the time the complex opened its doors some ten years ago, it quickly established itself as the leading retail facility in the KZN Midlands region,’ Kusano says. ‘Since then, the mall has experienced high demand for space by both local and national retailers. This demand has been addressed by expanding the mall in line with the growing economic needs of the district. The addition of the Stay Easy Hotel in 2010, for instance, brought a new dimension to the complex with a shift away from a strictly retail driven offering.’

Amelia Beattie, Chief Investment Officer of STANLIB Direct Property Investments, the asset manager for Liberty Group comments, ‘This significant investment emphasises the viability of this asset in the KZN interior. We consider Pietermaritzburg a stable commercial environment with good economic growth predicted in the future. The expansion project is in line with Liberty Group’s strategy to augment their existing world class retail developments with mixed use offerings to create a landscape for optimal success’.

With this new phase, the asset manager has targeted to achieve a 4-star SA Green Rating to improve cost efficiencies in line with the long term strategy of the portfolio. An additional R4.2million will also be invested in upgrading the immediate road infrastructure, to improve traffic flow and reduce congestion to the mall and surrounding area. Phase 3 will enhance growth, development and quality to the Pietermaritzburg community. Upon completion, Liberty Midlands Mall will benefit from being a true mixed use development where visitors can shop, work, play and sleep.

In addition to the redevelopment there will be the introduction of a new parking system in early 2014. The decision to commence paid parking at the mall follows the trend in the Pietermaritzburg area, and is in line with many major centres across the country. The new system allows for quick and easy access with enhanced security measures, including 24/7 CCTV coverage and patrols. The system will include a free twenty minutes of parking to accommodate those dropping into the centre to run a brief errand and those that stay longer will benefit from favourable rates.

Construction of the Phase 3 is planned to commence in early 2014 and the development is anticipated to be completed by mid-2015. Further details regarding the new tenants expected to occupy the extension will be announced in the near future.