The South African Property Owners Association (SAPOA) and the City of Cape Town will work to unlock opportunities by facilitating collaboration between the public and private sector. 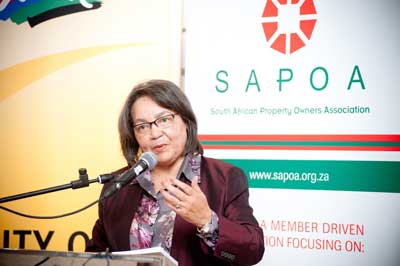 This message was delivered by City of Cape Town Mayor Patricia de Lille at a recent gathering hosted with SAPOA.

The event, which focused on the city’s plans on infrastructure expansion, efficient investments and incentives for the private sector, also created a platform on furthering the mutual interests of property owners and local government.

SAPOA President Estienne de Klerk says: “This is the first attempt to create an opportunity for the property industry to engage on issues affecting the buildings it owns in the city.”

Cape Town City Improvement District chairman Rob Kane, who is also Cape Town Partnership board member told the attendees: “Our research shows 30% of visitors who come here for business first, come back again for leisure. Attendees at major events in 2012 totalled some 159,400 people. The statistics are a result of a strategy aimed at ensuring the CBD is a quality environment where business can flourish.”

But while business in the city is thriving and great strides have been made, there are several issues affecting property owners. These, says Kane, include, “concerns over security, aggressive begging, lack of visibility and tight signage restrictions.”

De Lille addressed the concerns saying the city would undertake a review of its facilities and amenities to increase the potential for leasing and sales opportunities for interested buyers.

She also announced a new incentives policy designed to attract citywide and area specific investments. These would be made available via tenders.

De Lille highlighted the city’s focus on Atlantis, saying investors could look forward to large tracts of land at municipal valuation rates and capped development facilitation fees among other incentives.

For now, the commercial property sector, represented by SAPOA, and the Mayor’s office have agreed to meet to discuss matters further.