Positive news in the hospitality sector in South Africa is recorded at the 5 Star hotel level, which despite experiencing substantial decline between 2009 and 2011, recorded a national average RevPAR (revenue per available room) annual increase of 15.6 percent during 2012. This trend has continued into 2013 with year to date RevPAR growth as at the end of August 2013 reflecting an impressive 16.8 percent increase compared to the same period last year.

The Saxon Hotel, which is one of the star performers in the Johannesburg 5 star hotel market.

So says Joop Demes, CEO of Pam Golding Hospitality, who points out that in key hubs such as the Sandton and Cape Town areas this sector has reported a notable recovery. “In 2012 the RevPAR growth of 15.8 percent in the Sandton 5 Star market was ahead of the Cape Town growth of 12.4 percent during the same period. However for the first eight months in 2013 this has changed substantially, with the Mother City reflecting a further year to date RevPAR growth of 21.4 percent while Sandton reflected 11.7 percent growth.” (Source STR hotel survey).

He says one of the star performers in the 5 star hotel market in Cape Town is the privately owned and managed Cape Royale Hotel. Now only in its fifth year of full operation, it achieved an impressive 89 percent average occupancy for the first nine months ended 30 September 2013, while this hotel’s average growth in RevPAR during the last two years has been a remarkable 33 percent on average. In the city of Johannesburg, the 5 Star Saxon Hotel is achieving one of the highest average room rates of city hotels on the African continent, with total revenue for the first three months into their new financial year ended September 2013 up by a formidable 44 percent compared to the same period last year (2012).

Demes says that it’s fair to say that business confidence has driven destination preference, especially with South Africa being a long haul market. With Sandton being predominantly a business – and increasingly a business tourism (conferencing) destination, it stands to reason that business sector driven growth resulted in a higher level of recovery in Sandton in 2012. The lag in Cape Town in 2012, being mainly a leisure destination, translated into a substantially more aggressive recovery in Cape Town in 2013.

“To obtain a better understanding of what has been driving 5 Star hotel performance in South Africa one needs to consider and analyse RevPAR, which is a combination of occupancy and rate. Occupancy at 5 Star hotel level has increased by a substantial 10 percent in comparison to 2012 while the 2013 year to date performance reflects a further growth of 7.9 percent in relation to the same period the previous year,” says Demes. (Source STR hotel survey).

He says that overseas visitor arrivals, excluding Africa, grew by 15 percent in 2012 and the available statistics from Stats SA reflect further growth in overseas arrivals of 6.1 percent for the period ended June 2013 (compared to the same period in 2012). In addition to the positive impact of overseas arrivals on the 5 Star market, arrivals from Africa have consistently increased over the past five years and more, while the business and higher end leisure segments of this market clearly have a marked preference for luxury hotel accommodation.

Furthermore, RevPAR has increased more notably in 2013 compared to the previous year. And in 2012 the average room rate achieved at the 5 Star level increased by a marginal 1.9 percent in 2012 but achieved 8.2 percent in 2013 for the first eight months for the year to date (source STR hotel survey). 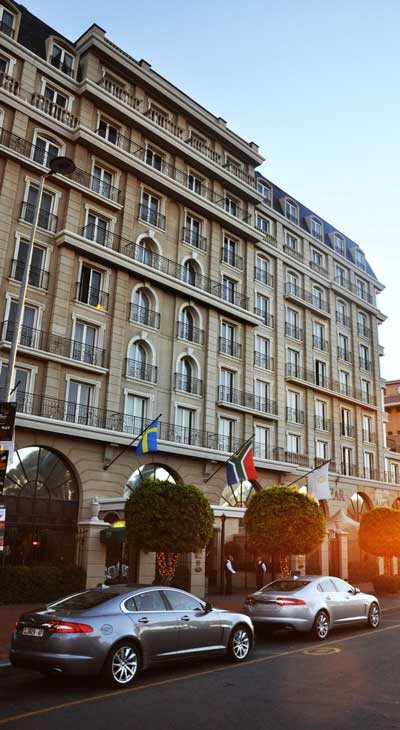 The Cape Royale Hotel, which is one of the star performers in the Cape Town 5 Star hotel market.

Explains Kamil Abdul -Karrim, MD of Pam Golding Tourism and Hospitality Consulting: “There are numerous factors contributing to this. The 5 Star hotel segment and essentially the entire hotel industry emerged from an extremely difficult trading period spanning 2009 to 2011, notwithstanding the 2010 FIFA World Cup boost for a limited period. The constrictive trading period was driven by the domestic recession and the global economic contagion and was exacerbated by the accelerated increase in hotel room inventory between 2008 and 2010.

“While the increase in inventory was planned and developed over an extended period in reaction to the demand growth that evolved from 2005 to 2008, the unfortunate economic decline following the September 2008 meltdown resulted in what has come to be referred to in South Africa as a hotel room ‘oversupply’, unfortunately without the requisite substantiation behind the term.”

Karrim says the growth in demand in 2012 reflected the first indication of trading levels reverting back to the bullish 2007-2008 period and the average room rate remained fairly stagnant as the excess inventory in the market was mopped up. However, with growth in demand sustaining into 2013, there is every indication that the South African hotel industry is again in a stable growth environment.

Continues Karrim: “The sustained increase in demand in 2013 resulted in opportunities for hotels to improve pricing, resulting in a substantial increase in the average room rate achieved – especially at the 5 Star level. Through engagement with tour operators the hotel industry has seen pricing structures evolve whereby the fixed contract pricing regime of the past, irrespective of the level of demand, is now in a much more dynamic environment.

“The other major factor is the way people make bookings. It is no more a case of purely buying a packaged tour, added to which travel lead times have contracted considerably. Today we find more and more overseas visitors booking their own accommodation and flights directly through electronic (web-based) platforms, bypassing the ‘hidden’ margin of tour operators. This segment of international leisure-based tourist is referred to as FIT – free and independent traveller. The attractive current exchange rate further enhances demand.”

Concludes Demes: “Talk of an oversupply of hotel room inventory in South Africa, especially at the 5 Star level, is no longer really relevant. What we need to understand about the supply / demand dynamics in the hotel industry is that it differs from most other industries. If the demand for a particular manufactured product increases, one simply increases production to meet demand. Even the airline industry, which is the most closely related industry to the hotel industry, differs fundamentally. If the demand for seats increases, an additional frequency to the route can be added. But when demand for hotel accommodation increases, it’s not just a matter of adding rooms. The process of building a hotel typically takes three years or more from planning to design construction and opening.

“However, the Achilles heel to demand in the hotel industry is capacity, as this drives demand as opposed to the other way round. Bookings can only be generated if rooms are available. This was the catch 22 situation of the period 2004 to 2007, when there was insufficient capacity to satisfy demand, ultimately resulting in the displacement of demand to alternative competing global destinations. I believe, and we have commented about this in the past, that we should view what we experienced in terms of hotel development from 2008 to 2010 as capacity creation, rather than simplistically taking the easily misunderstood stance of ‘oversupply’,” he says.