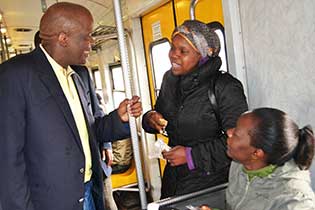 On their arrival at the Germiston Train Station, the Executive Mayor admitted that work to introduce the Integrated Rapid Transport System must be fast tracked, stating that the fact that only seven percent of commuters use trains, regardless of their cost-effectiveness, shows that the current public transport system is not responding to the needs of the people.

“It is crucial that we create an Integrated Public Transport System, working with the Passenger Rail Agency of South Africa (PRASA) and other stakeholders, so as to provide our commuters with seamless means of public transport,” Clr Gungubele said.

The Executive Mayor and his committee used bicycles to proceed to their offices at the Germiston Civic Centre.