Propelled into the global spotlight and often described as ‘the world in one country’ during the 2010 Soccer World Cup, South Africa retains its fascination as an international destination, as borne out by the number of tourists who visit its shores.

A reflection of the vast array of contrasting scenic locations across the length and breadth of the country is the broad range of residential properties, which are available for home buyers to suit their own individual desires and requirements.

“It’s no wonder that many international visitors, including and increasingly so from the African continent, find our way of life and our residential properties so appealing – whether to relocate here for permanent residence – including retirement, for use during several months of the year as leisure homes, or for investment,” says Dr Andrew Golding, CE of the Pam Golding Property group.

“The PGP website receives on average 2 000 visits a day from potential international buyers alone, while we also receive numerous global enquiries through our association with UK property giant, Savills, which has some 500 offices in the UK and Ireland, United States, Europe, Asia, Australasia, India and the Middle East.

Says Charles Weston-Baker, Savills international residential director: “For many years we have enjoyed a long and fruitful association with Pam Golding Properties (PGP) which combines their exceptional depth of local market knowledge and coverage in South Africa and Africa with the worldwide reach of Savills. Savills has undergone dynamic growth in recent years and our brand, with its distinctive yellow and red logo, now holds a powerful global position and therefore offers further comfort to international buyers looking to invest in residential property in South Africa and Africa through PGP.”

Continues Dr Golding: “Those who do acquire property here often choose to stay for long periods at a time or invest in commercial businesses, bringing direct foreign investment into the country through increased employment opportunities, improvements to properties or their own consumer spend. We find an increasingly broad spread of countries around the globe are represented in those international buyers who purchase property through us, with UK purchasers traditionally the most prevalent. The balance is an interesting mix including African countries such as Angola, Zimbabwe, Mozambique, Nigeria, Congo – DRC, Kenya, Ghana, Malawi, Gabon, Uganda, Rwanda, Zambia, Ivory Coast and Namibia; European countries such as Belgium, France, Germany, Italy, Portugal and Switzerland; Asian countries like Hong Kong, Taiwan, China, India and Indonesia, as well as the United States, New Zealand and South America – even from the island of Barbados. Over the past 12 months we’ve sold properties to buyers from about 45 different countries around the world.”

PGP says the prices of properties sold to international buyers also vary considerably, everything from small apartments priced from around R300 000 to high end properties from R30 million and up to R110 million in Cape Town on the Atlantic Seaboard . In fact, Pam Golding Properties Atlantic Seaboard office reports that over the past six months international buyers have re-entered the market in significant numbers and across all price ranges, ranging from modest leisure apartments to luxury penthouses and luxury homes with renowned, scenic Cape Town views.

Says Laurie Wener, MD for Pam Golding Properties in the Western Cape: “With its high international profile as a sought after tourism destination and desirable, cosmopolitan lifstyle, the Western Cape metropolitan area stands out as the area of preference for overseas buyers – particularly the Atlantic Seaboard with its beautiful beaches, spectacular ocean views and quality architecture. Notable is that the spread of international buyers in this area originates not only from our traditional markets, such as the UK and continental Europe, but also increasingly with a stronger leaning towards buyers from Africa, the Middle East and China. 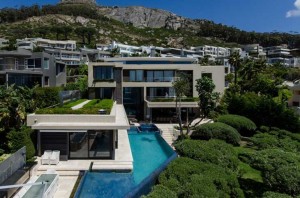 This luxury home in Fresnaye on the Atlantic Seaboard, Cape Town, was sold for R110 million by Pam Golding Properties to a buyer from the UAE (United Arab Emirates).

Home in Fresnaye sold for R110 million to UAE buyer

“There is a dramatic increase in buyers from the rest of Africa, most likely attributable to increasing wealth in emerging economies and greater awareness of the quality of life on the southern tip of the African continent. Our ultra top-end international buyers seek unique, exceptional properties with unobstructed, panoramic sea views and the highest degree of privacy available in these most sought after suburbs,” she adds.

In the Cape’s historic Boland and Overberg regions, regional MD Annien Borg says international buyers usually visit South Africa during the months of March/April and October/November. “We are receiving more enquiries from South African expats living in the UK who are wanting to return home. In regard to wine farms, we are seeing a number of Chinese businessmen looking in the Cape Winelands, generally in the upper price range from R25 million upwards, as well as enquiries from large international companies from various countries for agricultural fruit farms.”

In Gauteng, Jonathan Davies, joint area manager for PGP’s Hyde Park office in Sandton has also noted a diversification of buyers originating from a broader variety of countries. “Among others, we are seeing interest from Ghana, Nigeria, Zimbabwe, Kenya and China. Prices vary from R2 million to R50 million, naturally depending on their requirements. Some are relocating for business reasons ie a job transfer and need to purchase a home close to their office, others seek investments and look for a property with security and a good address with high rental yields. Others purchase luxury accommodation for permanent accommodation or as a local home to use on visits to South Africa. At the top end of the market some ultra high net worth buyers look at heritage or iconic properties while others seek prestigious properties in suburbs such as Bryanston, Westcliff, Hyde Park and Sandhurst.”

Elsewhere in Gauteng PGP sales to overseas buyers include a furnished apartment in Bedfordview sold for R2.2 million to an Angolan buyer for family use when in Johannesburg, a property in Saddlebrook Estate, Midrand, sold to a Chinese buyer for R6 million and in Kyalami Estate, Midrand a home sold to a buyer from Mozambique for R10.8 million. In Fourways a home in Dainfern Valley was sold by PGP for R9.3 million to a Mozambican buyer for use as a Johannesburg base when in South Africa.

In Pretoria regional executive for PGP, Retha Schutte comments that the most interest is from embassies and foreign missions, seeking properties priced between R10 million and R25 million. Their requirements include large dining rooms to accommodate 12 to 24 people, flowing living and entertainment areas, closed kitchen and set on a spacious stand with flowing lawns for marquees. “Waterkloof and Waterkloof Ridge are the most popular areas with 17 embassies situated in one street in Waterkloof Ridge alone. In addition, investors from African countries such as Uganda, Kenya and Nigeria are seeking blocks of flats and commercial property for investment purposes,” she says.

In KwaZulu-Natal PGP has noticed growing interest in the Point Waterfront, with an apartment in The Spinnaker recently sold for R1.9 million to a Ugandan buyer, while on the Garden Route PGP’s Knysna office reports a number of sales to international buyers. These include a property on Leisure Isle sold for R2.4 million to a UK buyer, a home on Thesen Islands which was sold to a UK buyer for R9.8 million, and properties in Pezula Private Estate sold for R5.6 million (a home) and R14 million (vacant land) to buyers from Switzerland and the USA respectively.

Pam Golding Lodges and Guesthouses (PGLAG) reports that their international buyers – who are still mainly from Europe, namely Holland, Germany, France and the UK – often include those who have had a good 20-30 years working for large corporate companies and desire a change in lifestyle. Says Peter Bruil, MD for PGLAG: “They’re typically interested in buying a guesthouse in South Africa as it affords access to a lifestyle they could not necessarily enjoy in their own country, plus the exchange rate is attractive. They seek to live from the proceeds of the business and still have time to enjoy all this country has to offer.”

He says the current trend indicates that international buyers still prefer guesthouses with anything from five to eight rooms, with the average price of enquiries around R8 million. “They prefer the style or interior of the establishment to be true to South Africa, either Colonial style or Cape Dutch exterior mixed with a modern African interior. The Western Cape is without a doubt the most popular area particularly the Cape Town central city, Atlantic Seaboard, Cape Winelands, Somerset West and Hermanus. The location is key as they are looking to service the tourism market,” adds Bruil.