Growthpoint Properties Limited and Rabie Property Group have announced they will develop the first premium office building in a new precinct at Century City in Cape Town, with the potential for 150,000sqm of development.

This powerful joint venture will develop the new 17,262sqm office building for a total investment of R423 million. It is the first building in the new precinct on the N1/Ratanga Corridor of Century City that Growthpoint and Rabie will develop together.

The prime commercial property will be developed in two phases, with the first phase spanning 9,363sqm of premium office space which will be complete early 2015. It will feature a parking ratio of 3.5 bays per 100sqm of offices on site while additional bays will be available in the adjacent public parking facility to meet potential higher demand. The new Mycity bus service is due to commence its operation throughout Century City from November 2013. The building is also designed to Green Building Council of South Africa 5-Star Green Star SA rating standards. 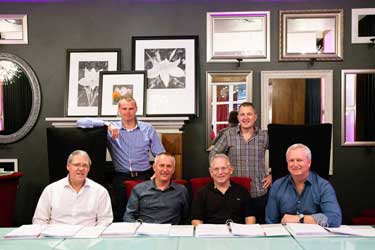 “Vacancies at Century City are substantially lower than the national average for office vacancies. Thanks to good demand levels, it has shown some consistent rental growth in a tough market,” says Pienaar.

He adds the new Century City office development will strengthen Growthpoint’s office portfolio with top quality assets. It will also balance its investment spread in the Western Cape office market. This includes Growthpoint’s 50% stake in the offices of the V&A Waterfront as well as several landmark buildings in the city.

Colin Anderson, Director Rabie Property Group, says, “We are very excited to partner with Growthpoint Properties on this exciting new development as it shows confidence in Century City as a premier development node.”

“Rabie has a phenomenal track record and we’re pleased to partner with them,” says Norbert Sasse CEO of Growthpoint. “The success of their Century City developments shows the superior investment property assets they deliver,” adds Sasse.