Residents of Ocean View will be able to see the first show houses of the City’s innovative stone masonry housing project. This project uses stockpiles of Table Mountain sandstone to build affordable, resource-efficient and comfortable homes for qualifying beneficiaries. 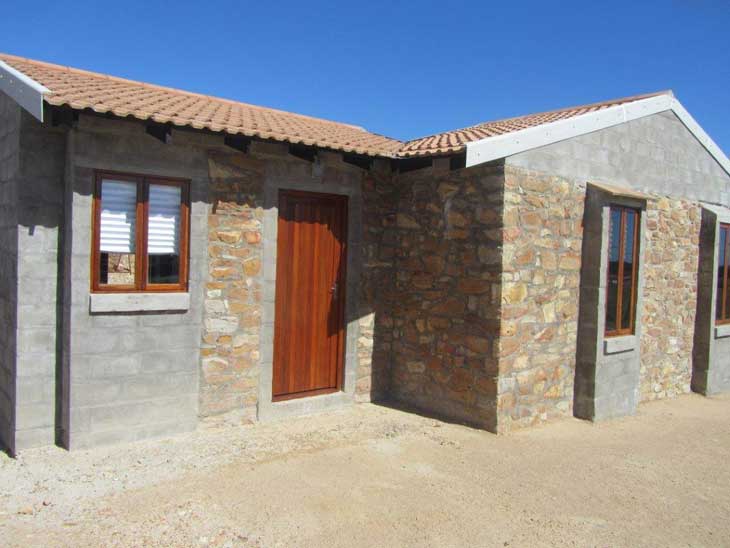 The site contained abundant building materials, and there was a chance to construct aesthetically-pleasing, solid, quality homes as opposed to the standard block subsidised homes.

“These show houses form part of a streetscape of 32 units currently under construction. It showcases the effect of the stonework and gives an added perspective to what the development will eventually look like,” said the City’s Mayoral Committee Member for Human Settlements, Councillor Tandeka Gqada.

The recent heavy rains have unfortunately delayed the final finishes of the houses, including painting and minor plaster work.

It is estimated that the first 100 houses will be completed by the end of March 2014, while all 543 housing units of the project should be completed within a two-year period.

This project is unique in that 30 local trainee stone masons are undergoing a six-month training course. On completion of the course, the trainees will form part of the construction team and will be responsible for the stone work on the remaining housing units.

“This project forms part of the City’s commitment to job creation, redress and the transfer of skills to previously disadvantaged communities,” said Councillor Gqada.

To date the project has employed 200 local unemployed people in accordance with the Expanded Public Works Programme.

Originally the land on which the development is situated was sub-divided for a housing project in the late 1980s, but the cost of excavating the rock material was deemed too expensive. However, in October 2006, a contractor was appointed to remove the rock for which the crushed material was sold over a four-year period. At the same time the density of the sub-division was increased to make the subsidy housing project financially viable.

During this process, the City realised that this housing project afforded a significant opportunity to deviate from conventional housing delivery models and to innovate for sustainability. The site contained abundant building materials, and there was a chance to construct aesthetically-pleasing, solid, quality homes as opposed to the standard block subsidised homes. The project’s main objective is to maximise social benefits and minimise the environmental damage associated with building construction.

In April 2012 the City appointed architects specialising in stonemasonry design and construction and in March 2013 the construction of the first show houses commenced.

In addition to the resource-efficiency of this type of construction, the project has saved an estimated R6 million in transportation costs to an already overstretched landfill site. These funds have instead been channelled into skills development for the local Ocean View community.