The winners of Growthpoint Properties’ hotly-contested Operation Millionaire have been announced, with Broll Property Group scooping up the two top overall awards. 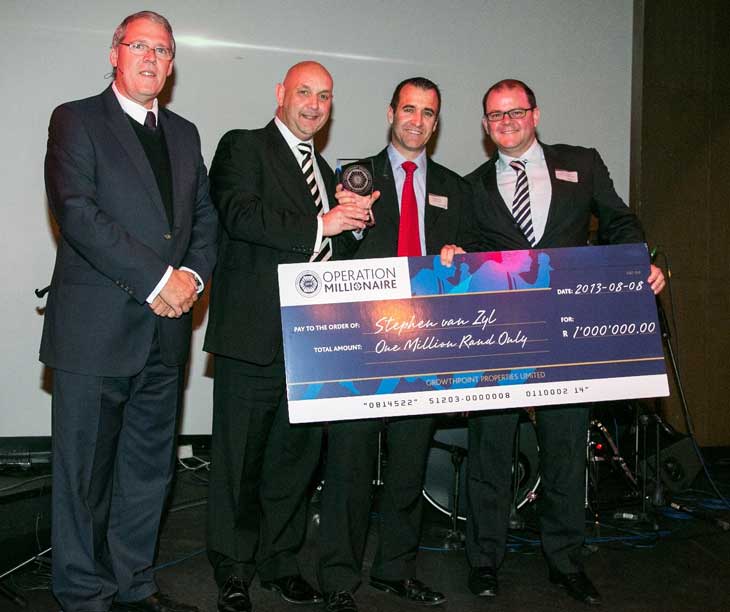 The sought-after awards are presented yearly for excellence in office space leasing within Growthpoint Properties’ assets.

Dillon Swartz of Growthpoint Properties Office Division says: “The broking community is a valuable partner to Growthpoint and the many businesses that occupy our quality office portfolio. Each year, we strive to improve our service to them and build on our excellent relationships. Through Operation Millionaire, we have the opportunity to reward outstanding leasing performance in the broker community.”

Broll Property Group was the broker firm that secured the most new deals across South Africa by value for Growthpoint. Its hard work resulted in leases totalling R143 million and won Broll a special R100,000 corporate event.

This year’s star of Operation Millionaire is Broll broker Stephan van Zyl, who earned the R1 million individual grand prize as the broker to make the largest single deal or accumulate the most deals over the competition. Stephan’s winning deal is valued at R97 million, with his accumulated deals totalling R102 million.

Malcolm Horne, CEO of Broll, says: “We’re delighted at the broking success our team has achieved for the Growthpoint office portfolio, and to be recognised as leaders for the results we produced for South Africa’s largest and leading REIT company. Congratulations to all our brokers, and especially well done to Stephen van Zyl from our Cape Town office.”

He adds: “Stephan’s winning deal resulted in signing Visa at Willowbridge in Cape Town. This deal was a great group effort and special thanks must go to Broll’s Corporate Real Estate Services team as Visa is a client of CBRE, our international partner, that Broll services locally.”

The two regional winners, Jamie McWilliam of McWilliam Murray in Durban and Brendon O’Hagan of Gradion Property Investments in Gauteng each received R150,000 for their outstanding deals in these regions.

“The success of this competition is down to the hard work put in by everyone who took part. Growthpoint would like to congratulate all of our winners, and we wish each and every one of them the highest success in their future endeavours,” concludes Swartz.

Growthpoint will run its Operation Millionaire competition again this year for deals concluded up to 30 June 2014. Then, it will expand the competition for deals concluded from 1 July 2014 to 30 June 2015 to include industrial leasing and offer an additional R1 million grand prize for largest deal or aggregate deals by value concluded by an individual broker in Growthpoint’s industrial portfolio.