The Rawson Rentals Brackenfell franchise, which has its office in Bothasig and which, established in November 2011 has, says the Rawson Property Group’s Managing Director, Tony Clarke, been one of the group’s most successful new start-ups. This, he adds, reflects not only the competence of the franchisee, Adrian Viljoen, but also the “very healthy” situation in rented property in the less expensive Northern Suburbs of Cape Town – including Bellville, Brackenfell, Loevenstein, Boston and Parow. 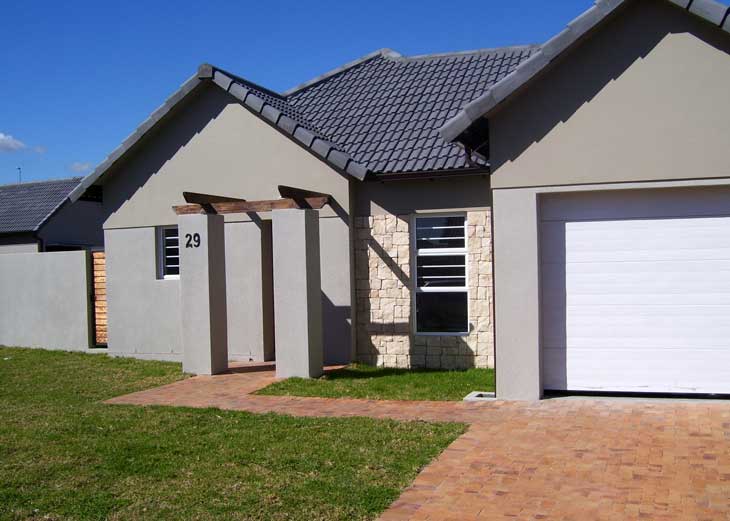 Front view of a newly built home in the Shiraz estate in Sonkring, Brackenfell. This estate offers modern two and three bedroom homes with rentals starting at R7500.

Viljoen said this week that he now has between 90 and 100 properties to manage and is signing on new mandates at the rate of three per month.

“There are three main reasons why demand for property in this region is so high that it in fact far exceeds supply,” said Viljoen. “The first is that a large number of people, especially those in the lower income groups, do not qualify for bonds and until they can improve their credit records and up their savings for a deposit they will not do so.”

“The second reason is that rents here, although varying widely, are still affordable and are often way below what the tenant would, in fact, pay on a monthly bond on the same property.”

“The third reason is that enterprising developers have ensured that a continuous stream of well-priced, affordable new units are coming onto the market and this flow, although insignificant to satisfy the demand, greatly enhances the appeal of this area.”

Obviously in a situation like this, said Viljoen, landlords will always try to raise rentals and several have in the last year achieved rises of 10% or more. He warned, however, that greed can be dangerous here because high rentals often eliminate worthwhile tenants who would probably pay on time and look after the property.

Buy-to-let investors, said Viljoen, are also doing well here, often covering their monthly bond repayments from the outset and after a few years making a substantial monthly profit, while at the same time the value of their units increases year-by-year.

As all the rental agents have repeatedly warned, Viljoen reminded us that the selection of the tenant is a crucial step in ensuring that the number of defaulting tenants in any portfolio is kept as low as possible.

On his portfolio, he added, the non-payers have been below 3% this year and of the total 95% pay on time.

“With initial viewings often conducted with groups of ten or more people, we are able to weed out the less serious and less promising prospective tenants right at the beginning before further checks are conducted. This way you can present the owner with the cream of the crop.”

“In a buoyant market like the present,” said Viljoen, “one is always reluctant to be too optimistic about the future. However as things stand now, all the signs point to buy-to-let investment continuing to be very satisfactory and it will be many years before the tenant demand is satisfied.”