With the Western Cape civil engineering strikes now in their third week, employers in the construction industry are not only counting their losses – but their worker casualties too. 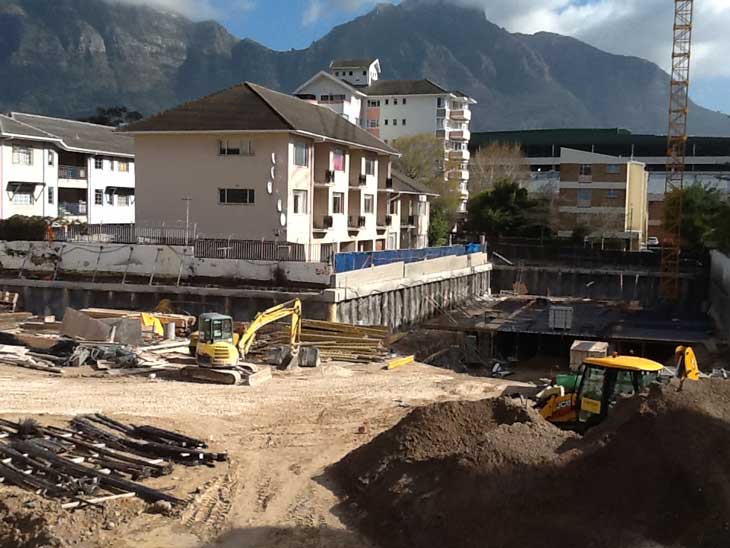 View of the now empty and silent “The Beaumont” construction site.

The strike began after wage talks failed between the South African Federation of Civil Engineering Contractors (Safcec) – and the National Union of Mineworkers (NUM) and the Building Construction and Allied Workers Union (Bcawu). While the labour dispute does not involve the building industry, many Cape Town construction sites and their workers have been badly affected by the civil engineering workers’ protest action.

“We heard the horror stories of NUM members descending on a construction site in Green Point armed with knobkerries and sticks, of countless other construction workers and their supervisors being forcefully intimidated and of construction vehicles being attacked and torched,” said Paul Henry, Managing Director of Rawson Developers, “but we didn’t have a clue that our site would be targeted next.”

On the afternoon of Wednesday the 4th of September at approximately 14:00, says Henry, more than 30 striking NUM members “hit” their “The Beaumont” construction site in Brooke Street, Claremont.

“Within minutes, the assailants holding golf clubs, pick handles and heavy sticks,” said Henry, “began to viciously attack our workers, aiming for their heads. It was obvious that the offensive was well orchestrated and that they had assessed the situation completely, as they knew the exact route our fleeing workers would use to escape and had stationed members of their own group in this area to cause maximum harm to as many people as possible.”

Some of the workers, says Henry, were able to escape the onslaught by locking themselves in site containers, hiding under their machinery, climbing under cement blocks and taking refuge underground – others, however, we not so lucky.

“Ten of our men were assaulted, said Henry, “six having been so badly injured that we called on private ambulances to have them hospitalised immediately. One of our foremen was knocked unconscious, suffering severe head trauma and others were left with broken arms after merely trying to fend off the incensed blows of the strikers.”

The unlocked site containers baring the workers’ bags, food and clothing were also ransacked, says Henry, leaving many without even a train ticket to get home.

“This was a cowardly attack on an innocent and unsuspecting workforce,” said Henry, “who’s only desire was to earn an honest day’s pay. The fact that this strike has nothing to do with construction and our workers are not part of the unions involved, makes this abhorrent act all the worse. The perpetrators need to be brought to justice and as far as NUM are concerned, they can no longer just throw their hands up in the air and claim that they do not condone these violent acts.”

According to an article published in the Cape Argus, the National Union of Mineworkers in the Western Cape admits that preventing “scab” labourers from getting to work and shutting down operations at construction sites forms part of its members’ strategy in the on-going industrial action. However, NUM’s Western Cape general secretary Happiness Holiday says that these strategies needed to be employed peacefully according to the union’s rules and that the use of violence and assault was against these rules.

“On the very same day that our site was attacked,” says Henry, “a petrol station in Delft, a well-known pick up place for workers, was bombarded, leaving many injured and property damaged. We as a company will support whatever action is required to prevent any more of these gutless deeds from taking place and we have in fact already laid charges against NUM.”

Asked about the effect that this event has had on his business, Henry said that with his construction site now completely empty and silent, Rawson Developers is losing money in lost working hours amounting to hundreds of thousands of rands.