In the 2nd quarter of 2013, the FNB Former Black Township House Price Index for Major Metro regions rose by 8.4% year-on-year. This was mildly higher than the 6.3% recorded for the entire market in the 6 major metros (Ethekwini, Cape Town, Nelson Mandela Bay, Ekurhuleni, Joburg and Tshwane). This growth also represents an improvement on the 1st quarter’s 5.7% for Township regions. 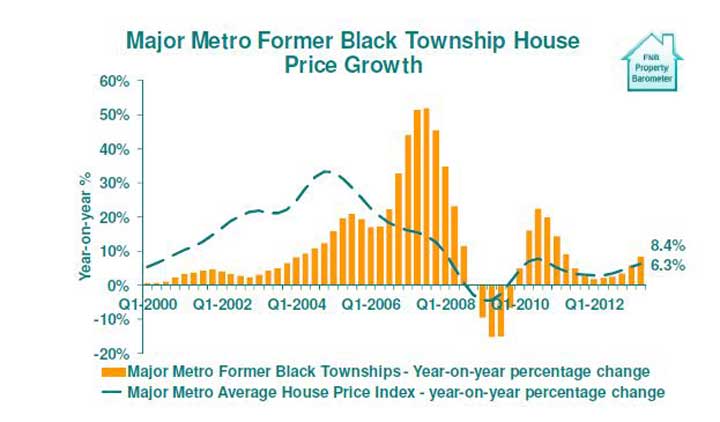 Former Black Township price growth performance marginally ahead of the
Suburbs of late, but how have they fared in the longer term?

Township markets have shown to be a bit more cyclical than the overall metro residential market, and this probably has much to do with a greater dependence on credit-driven home purchases amongst lower income groups. In addition, though, the economic cycle may also affect lower end employment trends and purchasing power to a greater degree, compared with higher income suburban markets whose residents have built up more significant wealth buffers in many instances.

So, around the 2008/9 recession and interest rate peak, the Township House Price Index saw a more significant house price deflation trough, reaching -15.1% year-on-year decline by the 2nd quarter of 2009 (compared to the more mild overall Metro low point of -4.5% decline).

But when the market has periods of strengthening, such as in 2009/2010 when interest rates were falling fast and the economy was recovering from the recession, one also saw the Township House Price growth rate rebounding more impressively than the overall market off a low base […continued…]