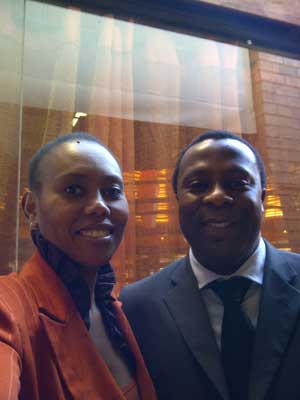 Discussing this recently, Bongiwe Madala said this was the first time in a long while that a new Rawson Property Group franchisee had taken on three franchises simultaneously – but she believes that she can make all of these work.

The new franchises are, in fact, owned by Phumelele, a Johannesburg attorney, but it is Bongiwe who is going to be running them. Bongiwe has a BCom from the University of KwaZulu-Natal and an MBA from Milpark Business School.

She and her husband, she said, have been watching the performance of Johannesburg CBD property for some time now and have been literally ‘amazed’ at the way in which values are increasing.

“We have here,” she said, “a situation in which demand is likely to exceed supply for some time to come. There has been a huge influx of people from outlying areas into this precinct, with the result that we have, for example, seen a five-storey commercial building in the CBD which was for sale for about R1 million 10 years ago which had increased to R5 million  recently.

“Many of these units,” said Madala, “were probably originally under-priced because investors at one stage had little faith in the CBD. However, their upswing in value has exceeded all expectations and has been ‘the big surprise on the Gauteng property scene’”.

She and her husband, said Madala, have got on the bandwagon and are renovating a single storey building in Commissioner Street. It is here that her own offices will be sited and her doors will officially be opened on 1st September and the building will bear the name Bomelele House.

Asked about the crime in central Johannesburg, Madala said that she will counter this wherever possible by installing a branch of a security company in any major building which she is managing. This tactic, she said, has already proved very successful for others in the CBD.

By the end of her first year in business Madala expects to be selling at least 15 units per year and, hopefully, to more than double this figure in the next three years.